On Saturday 17th July, Celtic travel to Clitheroe FC, a team we played (and beat) in a friendly last season, with Potts and Brickell scoring for us, and Spencer scored from a penalty after Dootson saved the initial shot, and he stooped to head in the rebound. 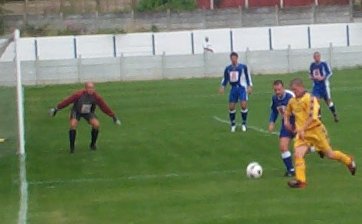 Clitheroe were formed in 1877 (as Clitheroe Central - but they dropped the Central when it was clear that there was only enough Clitheroe for one club). They plyed their trade in the Lancashire combination for over a century when they became a founder member of the North West Counties league, albeit in the third division. They went onto win the third, second and first divisions in consecutive seasons, and in 1996 won the FA Vase.

A few seasons back, Clittheroe had a massive cash boost when Crystal Palace bought Carlo Nash for ?45,000 and this has been funding them ever since!

Last season, Clitheroe won the Unibond First division (though if Mossley had not been docked 3 points for fielding an ineligible player - Mossley would have won), and even without the restructuring, would have gone into the Unibond Premier. With such prolific goal scorers as Jackson and Cryer, they were quite a force last season. They finished the league with 10 wins out of 15, 1 draw and 4 defeats.

Celtic will be looking for a moral boosting win against a team now only one division below us, but it will not easy. This will be Clitheroe's first game of the season.

On a final note, Clitheroe the town is very picteresque, and well worth a visit.
Directions
Distance: 39
Time: 1 hour and 15 minutes