Getting better...
By Iain Benson 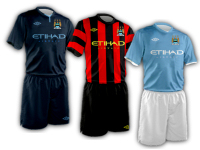 Celtic gave their visitors a bit of a scare in the second half of this match, but it was too late to alter the result. By the time Celtic had settled, they were already three down.

The first half was quite even in terms of possession, but advantage City regarding chances on goals. The massive presence of Miller in City's front line caused no ends of problems, and he was the first to test Pettinger. However, it was a conceded corner, just minutes in when City unlocked the defence, the powerful central defender Richards came from deep at the edge of the box on a corner to power his header past Pettinger.

City relaxed a little and played some good football, leaving Celtic chasing shadows at times. Just as Celtic were getting back into the game, Caldecott was harshly adjudged to have fouled Miller forty yards out. The free kick was whipped in and a well offside Birmingham put his head on the ball to head home. The offside wasn't seen, and the goal stood.

Within minutes, City had another corner, and again Richards burst onto it to smack his header into the back of the net, and it looked like Celtic were going to be drubbed.

Celtic did test the young Schmeichel when Price latched onto a Prince through ball and his shot took a deflection off Flood, forcing Schmeichel into a full stretch save. With Ellington coming in for a rebound, he did well to hold it. Schmeichel nearly let Celtic back in moments later though, as he came out to clear a back-pass, and Steve Smith nicked the ball away from him, curling his shot towards the back post, but Collins read the attack well and cleared off the line.

Celtic came out in the second half full of fire, and took the fight to City. Price immediately went close, with a header off Steve Smith's cross, but their good play came to naught, when once again, Richards got his head on another corner to bag his hat-trick and put the visitors four up.

Celtic weren't going down without letting City know they?d had a game, though. Steve Smith picked out Mulvaney with a great cross, Schmeichel was beaten, but D?Laryea showed great agility, stretching a leg to block. The ball rebounded out to Prince, his shot required a great save from the feet of Schmeichel, the loose ball fell to Wharton and he blazed narrowly over the bar.

Schmeichel was beaten when Price went on a diagonal run into the box, evading two challenges he blasted the ball over Schmeichel and into the roof of the net to reduce the deficit. Moments later Celtic were only two down, when Steve Smith's cross was knocked away from Ellington by the hand of Warrender. Mulvaney stepped up for the penalty and scored his first goal for Celtic.

Celtic were purring, and embarrassing their visitors. Such was the confidence that Price had a driven shot from easily forty yards that required an outstanding save from Schmeichel to tip out for the corner. The corner came across to Price whose shot rattled the crossbar and came to Celtic's latest recruit, Murcott. His shot from between his feet was cleared off the line by Collins.

Celtic were not to be denied, and Mulvaney, full of confidence, tried his luck after making some space thirty yards out, and the shot zipped across the grass and beyond Schmeichel's fingertips into the bottom corner. With three minutes to go, it looked like Celtic might really cause an upset, especially when Mulvaney tried his luck again, and the ball took a deflection of Jon D?Laryea, but again Schmeichel came to City's rescue to make a good stop.

Celtic took a while to settle, but when they did, they looked unstoppable, and Steve Wiggly had his team in the centre circle for quite a while after the match.