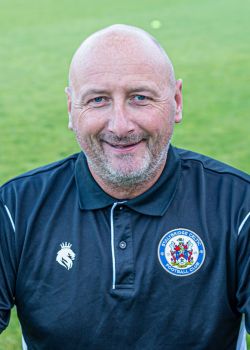 This is not the first time Chris has been in the management team at Celtic. For a couple of matches, he was the assistant manager under Benny Phillips in 2010.
Chris has been around the Northwest nonleague scene since he started playing at Flixton. Chris got a taste of management at Salford City, taking over as player manager in 2005, before he became Winsford Manager in 2006 and won promotion from NWC2 (earning manager of the year in the process). He left 2008 but went back in 2010. In between these two stints, he managed Mossley, Woodley Sports and had his brief stint at Celtic. After his second stint with Winsford, he returned to Woodley Sports in 2010. He managed Stocksbridge Park Steeles, before a move across to Glossop whom he led to Wembley in 2015 in the FA Vase and earned promotion in the same year. After a stint as manager of Shaw Lane, he became the manager of Ramsbottom United. During his two and a half years he was at the helm during one of Ramsbottom's most successful periods, pushing for promotion alongside Workington. It was to Workington he moved during the Covid pandemic, almost guiding them to promotion, losing out by one point.
As well as Flixton, Chris has played for Warrington, Altrincham, Kendal Town, Leigh RMI, Mossley and Ramsbottom.
Home Shirt Sponsor
Sponsor Required
Ring us on 0161 338 2828
Away Shirt Sponsor
Sponsor Required
Ring us on 0161 338 2828
Photographer