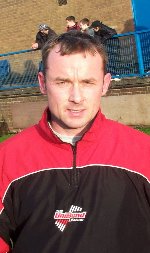 Barrow born Tony began his rise through the non-league at Bamber Bridge in 1994, where he was a major strike force for the club. His departure, one season later, was a major blow to the club. He joined Wigan Athletic in 1995 (singing for a ?12,500 fee), but never really broke into the first team squad on a regular basis, especially after a leg injury sidelined him for long periods. Even so, over a two year period he made 35 appearances (mainly as a substitute), gained areputation as a fearsome penalty taker, and scored four goals, two of which in the FA Cup. There followed a three year stint at Chorley after Wigan deemed him not fit enough to play at that level any longer, before he joined the rapidly rising Leigh RMI team that won the Championship. He has made 75 appearances for the railwaymen, and bagged 22 goals, one of which was Leigh's first ever goal in the Conference away at Dagenham and Redbridge (D&R won 3-1). In recent months he has been supplanted by other strikers, and Leigh needed to reduce the wage bill, and though Celtic expresed strong interest, Accrington enticed him away. After a few months, he realised that had been a mistake, and was released by Accrington to join the team he should have joined all along: Celtic! However, after very few appearances, continuing to play was too much, and Tony retired.
Career
Position
Striker
Born
15th Jul 1969 (51 years)
Joined
21st Sep 2002
Left
5th Mar 2003
Last App
1st Mar 2003
Last Goal
Never Scored
Career
Appearances
4
As Sub
3
Subbed off
1
Goals
0
Assists
0
Red Cards
0
Yellow Cards
0
Points
9 / 12
Average Points
2.25
Wins
3
Draws
0
Losses
1
Total Pitch Time
0 mins
Appearances
Sponsors
Site Sponsor