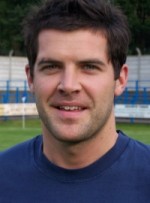 Dean was an apprentice at Spurs, but when first team football was not an option, he found himself playing for Brackenhall United in the Huddersfield League, in his home town. It was here that he was spotted by Emley, in 1997 He played for the Clarets for three years, before moving down the road a few miles to Bradford Park Avenue. He was a highly regarded player at his time at the Horsfall stadium, and it took a ?5000 price tag from Accrington Stanley to prise him across the boarder and into Lancashire in 2002. In his first season with Stanley, he made a big impression, but his second season saw him make only 6 starts and 13 appearances from the subs bench (he did manage to score a goal in that time), and when Stanley made the move to full time football for the 2004/2005 season, Dean was not part of this move, and joined Celtic instead. After stuggling with injury, he never got a decent run in the starting eleven, and was sent on loan to former club Bradford at the end of the season, before joinging them permanently at the start of the 2005/06 season.
Career
Position
Midfielder
Born
25th Jun 1975 (45 years)
Joined
29th May 2004
Left
10th Jul 2005
Last App
8th Feb 2005
Last Goal
6th Nov 2004
Career
Appearances
16
As Sub
7
Subbed off
4
Goals
1
Assists
0
Red Cards
0
Yellow Cards
0
Points
18 / 48
Average Points
1.13
Wins
5
Draws
3
Losses
8
Total Pitch Time
450 mins
Appearances
Sponsors
Main club sponsor