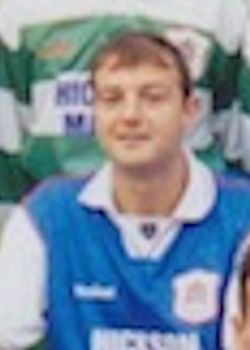 Steve started with Wrexham's youth team, before transferring to Leeds, where he was give a squad number, but no starts. In 1987 he joined Bradford City, for 1 appearance, before joining Rochdale where he made over a 100 appearances. In 1991 he joined Exeter City for a short spell, and moved onto Darlington in 92, making 88 appearances. In 1994 he returned to Wales with first Buler Town, then in 1995 played for Inter Cardiff and Barry Town - from where Celtic signed him. After Celtic it was back to Wales with Holywell Town, Caernarfon Town and Rhyl before he signed for TNS and then Bangor. In 1999 he joined Oswestry Town as player/manager, making 25 appearances, and then Cefn Druids in 2001 for three seasons also as player manager. He finished his playing career at Gresford Athletic in 2004 to manage first Caernarfon Town, then Connah's Quay but now coaches at Wrexham's Centre of Excellence.
Career
Position
Defender
Joined
1st Jul 1994
Left
1st Sep 1996
Last App
26th Aug 1996
Last Goal
30th Mar 1996
Career
Appearances
49
Subbed off
3
Goals
2
Assists
0
Red Cards
0
Yellow Cards
0
Points
56 / 147
Average Points
1.14
Wins
14
Draws
14
Losses
21
Total Pitch Time
4320 mins
Appearances
Sponsors
Main club sponsor