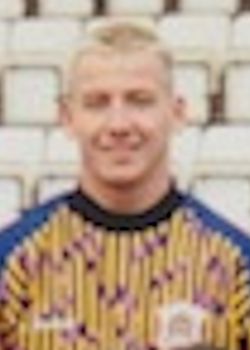 Harvey was the keeper for Celtic for two seasons. He started at Leeds United, and in 1994 joined Stockport County. A brief spell in the USA with Cape Cod Crusaders, before returning to the UK to play for Celtic. After Celtic, Harvey joined Cheltenham, then Newport and Gloucester City. In 1997, he joined Evesham United, then Trowbridge Town. In 1998 he had another trip back to the USA for Cape Cod, and then back to the UK for his second spell at Evesham United. In 2000 he joined Bloxwich Town then Tamworth, and then he finished up at Redditch.
Career
Position
Goalkeeper
Joined
1st Jul 1995
Left
30th Jun 1997
Last App
18th Dec 1996
Last Goal
Never Scored
Career
Appearances
50
Goals
0
Assists
0
Red Cards
0
Yellow Cards
0
Points
56 / 150
Average Points
1.12
Wins
15
Draws
11
Losses
24
Total Pitch Time
4500 mins
Appearances
Sponsors
Main club sponsor