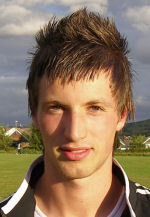 Tim proved his worth in the Celtic reserve squad, impressing manager John Reed during a training match with the first team, and was offered Conference North terms. Previously with Everton and Bolton youth, JR is not the only one Tim has impressed. He was featured on TV during a Pepsi Cola campaign called the Pepsi World Challenge, representing the UK. As part of this, he has ball-juggled with Ronaldhino, and passed with Beckham. His ball skills are excellent, and he is the runner up in the Nike Skills Championship (at ball juggling), and in the summer of 2006, represented his country in Germany - at six a side, under the management of Jamie Redknapp.
Career
Position
Midfielder
Joined
6th Sep 2006
Left
15th Oct 2006
Last App
13th Sep 2006
Last Goal
13th Sep 2006
Career
Appearances
1
Goals
2
Assists
0
Red Cards
0
Yellow Cards
0
Points
3 / 3
Average Points
3.00
Wins
1
Draws
0
Losses
0
Total Pitch Time
90 mins
Appearances
Sponsors
Site Sponsor