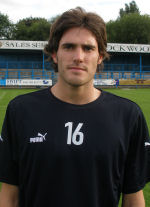 On loan at Bradford Park Avenue
Buxton born Scott played for the Port Vale centre of Excellence before moving onto play for Mansfield Town in 1999 as a midfielder. In 2001, he was sponsored by the PFA to study Sports and Exercise at Manchester Metropolitan University, where he played for the campus team, taking them to the final of the inter-university league cup and getting his university colours for football. In 2004, he joined Leek Town, but was sent on loan to Biddulph Victoria against Port Vale towards the end of the 2003 season. Instead of midfield, he was played in defence, and impressed the visiting Port Vale coach. In 2004, he joined Congleton Town still as a defender with a penchant for scoring; a position which he has excelled in - something that made him a fans favourite and he was made captain and swept the board at the award ceremony, collecting Supporters player of the year, Golden Boot, Sponsors player of the year and collected the Chairmans Shield.
Career
Position
Defender
Born
11th Sep 1982 (38 years)
Joined
27th Jul 2005
Left
1st Sep 2005
Last App
14th Sep 2005
Last Goal
Never Scored
Career
Appearances
2
Subbed off
1
Unused Sub
2
Goals
0
Assists
0
Red Cards
0
Yellow Cards
0
Points
6 / 6
Average Points
3.00
Wins
2
Draws
0
Losses
0
Total Pitch Time
152 mins
Appearances
Sponsors
Main club sponsor