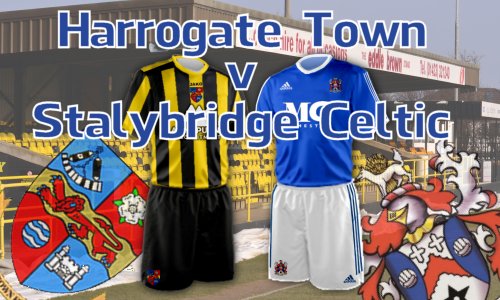 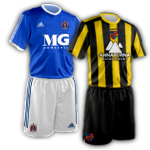 On Saturday, Celtic travel to Wetherby Road to face Harrogate Town (kick off 3pm). Harrogate are currently fourth in the league with sixty-one points, thirteen places and nineteen places above Celtic. There will be a match centre for this game.

Harrogate have been in the top five for most of the season, dropping to seventh only after a poor November that saw them win just one of five games, losing two and drawing two. Although they have been consistently fourth through March, the chasing pack have caught them up as they are going through their worst period this season, and haven't won in six games. Their last win was a five-nil demolition of FC United of Manchester at Wetherby Road that finished a run of two losses and eight wins in their previous ten games. Their last three homes games have been two draws and a loss, the loss being to AFC Telford. Of those last six games, five of them have been against teams in the bottom third. However, they are still mathematically capable of winning the league outright; being one of only four teams that can catch Solihull.

Harrogate's top scorer this season is Brendon Daniels, whose fifteen goals make him the joint fourth highest goal scorer in the league, behind the three way tie of Dayle Southwell, Danny Rowe and Tom Denton. They have the longest consecutive goals scored, with eighteen games, along with four consecutive clean sheets. They have the fourth best attack in the league, and are generally a second half team, scoring thirty-nine of their fifty-nine goals in the second half. Their most vulnerable period is just before the interval when they have conceded a quarter of their forty goals.

We've already faced Harrogate this season, losing 1-0 at home in the thrice postponed game. It had been a tight game in which Harrogate managed to convert one of very few chances. Our previous win over Harrogate was at the end of last season, when we won 2-1, Michael Powell and Aidan Chippendale. Chippendale's cross that turned into a shot put Celtic within reach of safety in that match. Our last visit to Wetherby Road finished 1-0 to Harrogate and you have to go back six games to 2010 for our last win there, a magnificent 4-0 win thanks to a Jody Banim Brace and one a piece from Michael Carr and Lee Dodgson. We did manage a goalless draw their in 2013, and a 1-1 in 2012. In thirteen visits, we have won only twice with Harrogate winning eight.

A win for Celtic could lift them four places, and still have games in hand over those teams above us. We have three games in hand on Alfreton in eleventh, and are six points behind them. A draw could lift us two places, depending on the Gloucester and Telford results. A loss for Celtic on Saturday, though, could see Worcester City overtake us.