On Tuesday night (Kick off 7:45pm), Celtic take on Lancaster City at Bower Fold for their opening home match in the inaugral season of the Nationwide North.

Lancaster are managed by ex-Celtic manager Phil Wilson, and the team comprises of many players that have donned the Blue and White of Celtic in the past, including Steve Jones, Andy Scott, Tony Sullivan, Jean-Paul Stanhope and Gary Bauress, players from Celtic's Championship winning side. 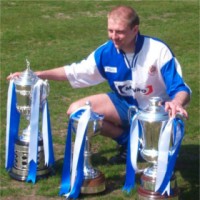 Steve Jones with the three trophies

Lancaster won their opening day fixture against title favourites Stafford Rangers, with a 1-0 scoreline, and new striker Zico-Black getting the goal on 83 minutes after both teams had been at loggerheads for much of the game.

Lancaster have made several close season signings, with ex-Accrington shot stopper Jamie Spears appearing between the sticks. They appear to have no injury worries coming into the game, and are likely to start with the following team:

Celtic's line-up is likely to be changed from Saturday's 1-1 draw with Worksop, with a preference for 4-3-3 in home games. There are doubts about Gregg Pearce, who received a severe knock at the end of the first half. Hopefully he will be able to play the full ninety minutes. Celtic still have injury woes, with Bowker, Caldecott and Denham all on the physio table, and with the suspension of Calcutt. This leaves the team almost picking itself:

Should Gregg Pearce not recover in time, then Sykes is likely to be dropped into defence, and Scott Bonsall will take his place in the middle, though given the industry of Sykes in the first half against Worksop, I would hope that Dave German is slotted into the middle, and Ben Smith makes an appearance in the right back role.

In the past few years, fortunes between the two clubs have recently swayed into the favour of Lancaster, as they won both fixtures, beating us 3-0 (including a very nice goal from Sullivan) at home, and 2-1 away (Potts scored for us).

In the preceding season, it was 6 points for Celtic, with 1-0 victories in both games (Potts and Eastwood scoring), and it is this form that we need to find this season.