On Tuesday, at 7:45pm, Stalybridge Celtic will be hoping to turn their fortunes around at Fortress Wetherby Road as they take on free-scoring Harrogate Town in the rearranged league fixture.

Harrogate lost their last fixture away at Altrincham with Celtic target Colin Little getting two of the Altrincham's three goals. Indeed, they have not won for three games now.

However, Harrogate are yet to lose at home, beating Barrow on the opening day, and Gainsborough Trinity 5-1 in their second home fixture. Their last home fixture was stalemate as Hinckley United caught the home side napping with an early goal. Harrogate equalised with seconds of the half remaining. Indeed, most of Harrogate's 11 goals this season have been scored in the first half, whilst they spread the 10 goals conceded equally between the two halves.

In midfielder Colin Hunter, Harrogate have a prolific goal scorer, and he is currently joint top the league Golden Boot with 6 goals. Playing on the other wing will undoubtedly be James Turley, the ex-Celtic winger who never really found his boots with Celtic in the Conference. 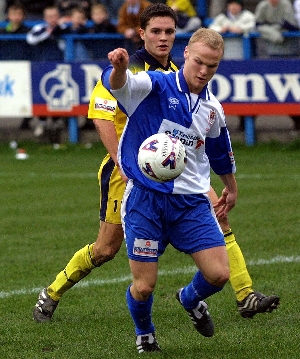 Celtic will be missing the services of Gregg Pearce, Kevin Parr, Danny Caldecott, Chris Denham and Nathan Wharton who are all still on the treatment table. Paul Sykes will be back, as will Dave German, leading to a line up along the lines of:

A more daring line up would see Celtic play 4-3-3, with Hindle on the flank instead of Monk, and Phil Eastwood in the starting line up.

Last season, Harrogate stuck six past us, including the four in seesaw game at Wetherby Road. Another loss would be disastrous, but a win by 2 goals would put us 12th in the table, a jump of 8 places. Celtic are now 11 points off the league leaders and mired in the relegation positions. A win, therefore, takes on a bigger meaning. Harrogate are not indestructible, and the prediction algorithm is predicting a 1-1 draw ? we need to convert that into a win, because a draw would leave us exactly where we are.
Directions
Distance: 68
Time: 1 hour and 30 minutes