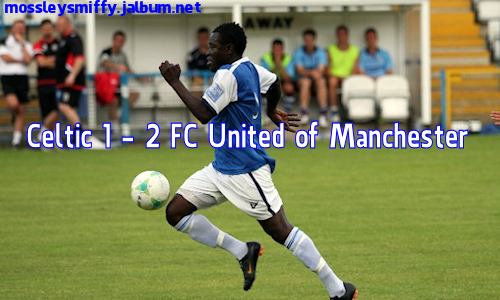 Despite a very early goal from Obi Anorou Celtic failed to build on it, and the final pre-season fixture went the way of the visitors.

Celtic didn't even have kick off, but Prince Haywood won the ball immediately, provided it to Conal Platt, who found Greg Wilkinson in the middle of the park, one touch and Obi Anorou was put through into the box, and he didn't disappoint with a swivelling shot that left Jon Worsnip no chance.

Greg Daniels nearly equalised moments later when he curled his shot just wide of the post. Both sides struggled to create a golden chance for the next half an hour, but it was FC United who broke the deadlock, with Lee Neville getting forward and putting in a near post cross that the impressive Matty Wolfenden got his head on and flicked over Celtic's loan keeper, Matt Urwin.

Conal Platt nearly put Celtic back in front as he burst into the box and shot first time, but Worsnip denied him, while at the other end, Urwin denied former Celtic loan player Ollie Banks with a flying save. There was nothing Urwin could do when Wolfenden turned provider pulling the ball back for Greg Daniels, Daniels beat Lees to the ball, and poked it past Urwin, in off the post.

The second half was open. Fabrice Bembo-Leta curling a shot from the corner of the box, but it was a comfortable save. Wolfenden's half volley at the other end was just over the bar. Anorou was an inch away from restoring parity as he got on Andy McWilliams low cross, but went the wrong side of the post. Play switched ends constantly, with Tom Greaves forcing Urwin into a decent stop, while new signing Gwimah Yaw was one-on-one with the FC United keeper, only to lob him and miss the net by scant inches. Andy Pearson went close from a corner, turning it just wide for the visitors, and Yaw showed great potential and pace when he forced his way past the defender, turned and shot in the box, forcing a one handed save to deny him.

The next game is the first game of the season, and it has to be hoped that all the information Jim Harvey needed to get from pre-season has been got, as it's a tough game against freshly promoted Hednesford.