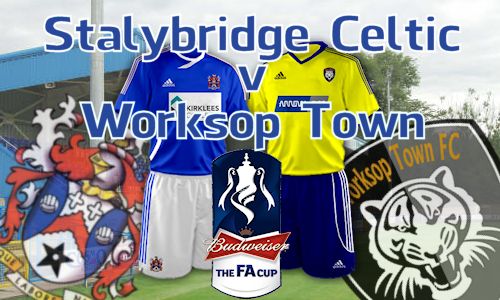 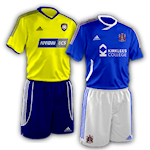 They say that goals win matches, but in this case it was more conceded goals that lost the match. Free scoring Worksop Town put five past Celtic ensuring the prize pot and a trip to the next round went to the visitors.

Celtic were without their usual keeper, Matty Urwin so youth team keeper Anthony Windle was his deputy, and what a game to make your debut in! Both sides created a bagful of chances, but the Tigers took the lion share of theirs whilst Celtic found finding the net more difficult.

In the opening minute there were chances at both ends, Chris Salt heading tamely into Windle's hands, whilst Wilkinson's was equally tame for Ben Hallam, and Sean McConville curled a great effort from the edge of the box narrowly wide of the upright. Warburton put his free kick the wrong side of the post, whilst McConville saw his next curling effort knocked out for a corner off the crossbar by Jordan Lemon's hastily raised knee. Anorou got his head on the corner, forcing a superb reaction save out of Hallam, tipping the ball over the bar, before Worksop broke off the corner and Leon Mettam saw his effort deflected onto the crossbar. Sean McConville had a perfectly good claim for a penalty waved away when he was sandwiched between Lemon and Salt, with Jordan Lemon's leg sending McConville flying an in need of treatment. Despite the stud marks on McConville's leg, there was insufficient contact to warrant a penalty!

Just past the quarter hour mark, Worksop again broke from a corner, this time to deadly effect, Jack Muldoon's race up pitch and curling ball into the path of Mettam gave Leon Mettam the chance to break the deadlock, and he did so easily. Seconds later, and the lead was doubled, when nobody picked Muldoon up at the edge of the box, and the Tiger's striker produced a great shot from twenty yards just beyond the fingertips of Windle.

Celtic should have pulled one back as Anorou Salt and Hallam all challenged for the same ball, Salt heading over his own keeper before clashing with Hallam, and the two landing on Anorou. The ball went in to the back of the net, and only the referee knows how Anorou fouled either player after he was extricated from under them and had to be substituted a short while later. Just past the half hour mark Sean McConville's curling shot was well tipped away by Hallam, but Celtic couldn't make use of the corner.

Celtic looked to have the game slip out of their reach when Tom Denton was given the keys to Bower Fold to stoop in and nod Worksop's third just past Windle, but Lewis Hatch had other ideas, pulling one back for the beleaguered home side, with six minutes left on the clock. Adam Pepper dropped the ball off to him and he unleashed a pearler of a shot that left Hallam no chance of reaching it.

Moments later and Greg Wilkinson will be kicking himself for not putting Celtic 3-2 at the break and giving Celtic a fighting chance in the second half when McConville's perfect cross met with the unmarked Wilkinson at the back post, with Hallam beaten, it was agonising to watch as the ball went the wrong side of the post.

To add insult to injury, at the other end, Leon Mettam forced Windle into an outstanding point blank reaction save. It is a shame the rest of his defence didn't share the reactions as Shane Clarke pounced on the loose ball and stabbed home, leaving Celtic 4-1 at the break instead.

Celtic really needed to kick on and get an early goal back at the start of the second half, instead hesitant defending meant Kristian Platt was turned completely around by Mettam who, to be fair, produced a stunning finish after picking the pocket of the Celtic defender and cracking his shot past Windle, and making the task seem seemingly impossible.

Celtic weren't done yet. McConville beat Hallam with fierce drive, only for the ball to smash back off the woodwork the loose ball falling to Joel Bembo-Leta, now up front. Bembo-Leta got underneath the ball and headed over when it looked easier to score, then Celtic did reduce the deficit, Krisitan Platt's pinpoint fifty yard pass to McConville. McConville's perfect first touch, clever footwork getting him forward into the box, deft feet around the keeper and curling it from an acute angle into the goal.

Seconds later and Lewis Hatch saw his shot deflected off the woodwork, as the Celtic team worked hard to reduce an insurmountable deficit. Then it was down to just two behind, when McConville was in the process of repeating his trick of dancing through the Worksop defence when he was unceremoniously shoved over by Lemon in the box. The two handed shove earned Lemon a yellow card and Celtic a penalty that Kristian Platt took, smashing it so hard and fast past the keeper that Hallam barely had time to start moving before it was in the back of the net.

Chris Salt almost turned Conal Platt's wicked cross into his own net, with Oscar Durnin arriving at the back post, whilst Joel got handed a glorious chance to reduce the arrears to just one and set up a grand stand last ten minutes, but seemed to get the ball stuck in his feet allowing Hallam to collect. Bembo-Leta was then put one-on-one by a great through ball from Hatch, but Hallam saved well one-on-one before Platt tried his hand himself a couple of times, requiring one that sailed over to get his eye in, and then forcing Hallam into a stuck out leg to give Celtic a corner in the dying minutes.

However, Hallam claimed the corner very easily, summing up the game nicely.

Although Celtic will look to the penalty not given, and the perfectly fine own goal ruled off for an unfathomable reason, Celtic's lapses at the back and inability to put the ball in the back of the net when handed gilt edged chances of their own, is what ultimately cost them a place in the next round.