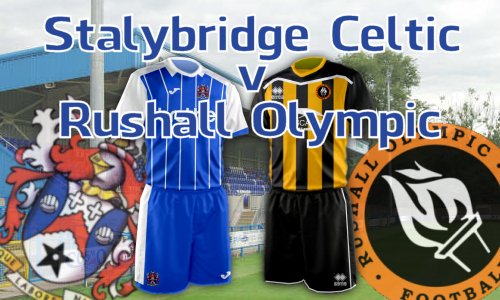 Celtic Lose At Home To Rushall
By Debbie Taylor 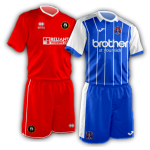 Shot shy Celtic continued the poor run of results as 2017 comes to a close, allowing Rushall Olympic to leave with the three points.

The opening ten minutes boded for a goal filled match, with Celtic's first attack resulting in a goal, as Alex Honeyball's near post cross meant for the head of Matty Wolfenden was met instead by the head of Joe Hull, denying Wolfenden his goal, but not Celtic the lead. However, Rushall were right back in the game a minute later, as Celtic's defence backed off and backed off from Andre Landell until he had the time and space to pick his spot to equalise. Rushall threw bodies in the way as Celtic looked to regain their momentary lead, with Connor Hughes culminating a good move with a wicked shot that saw a stuck out leg deny him, and Alex Honeyball's twenty-five yard scorcher coming in from the wing also took the slightest of deflections to send it the wrong side of the post. At the other end, Rushall were looking dangerous from set-pieces, Joe Hull's header from a corner rebounding from the bar, and Celtic scrambling clear.

It looked to be more of the same in the second half, with Celtic unable to craft a goal from the crumbs of chances they did create. A free kick floated to the back post saw Liam Dickinson pounce, but Jahquil Hill had come across well to block at his post. From the corner, Olympic struggled to get the ball clear, and Theo Bailey-Jones fired in, only for his shot to be deflected out for another corner on-route to the bottom corner. Dickinson turned provider for Wolfenden with a fantastic whipped in cross, but Hill saved well.

Rushall broke up field quickly, with Celtic committed; Danny Waldron raced at new goalkeeper James Coates, Danny Morton matching Waldron stride for stride, but Waldron managed to get his shot off, looping it over Coates, the ball skimming on the bar, and out to the wing. Celtic looked to let it go for a throw, but Charlie Duke had other ideas, keeping the ball in and whipping in a cross. The Celtic back line were back, but they and the strikers all missed, the ball coming through to Waldron who lashed home the winner.

Celtic pushed for an equaliser, but for forty minutes fashioned five chances. Bailey-Jones shot from the edge of the box forcing Hill to his left, whilst Jordan Chapell's cross for Wolfenden coming at the back post was again nicked away from Wolfenden, this time by Brian Smikle, but going wide this time. It took quarter of an hour for Celtic to get their next chance, a set-piece that loanee, Sam Sheridan lofted into the box for Ross Killock; his header superbly saved by the alert Hill. The failure to take chances was summed up in the final throes of the match. After Chapell's shot had clipped the crossbar on the way out, Celtic got the ball into the box twice more, but each player seemed reluctant to be the one who took the chance, instead passing the ball off, and eventually it was put out for a corner, that came to Luke Ashworth who headed wide across the face of goal, with no Celtic leg to knock in the equaliser.

Celtic remain in a precarious position just a point off bottom spot.