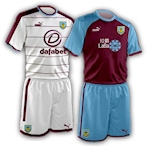 The first half was where all the chances were during a good work out for a Celtic team consisting of several trialists.

It started well for Celtic, causing plenty of problems for the Burnley fullbacks on both sides. An early corner was poorley dealt with by the Burnley backline, Craig Hobson swinging at a glorious chance but missing, allowing the ball to bounce through to Neil Kengni who connected at an awkward height but still manahed to turn the ball in. Three minutes later and similar pressure resulted in another corner, this time Declan Walker's excellent curling corner connected with by Hobson who planted his header over the Burnley keeper.

Celtic were looking organised and powerful, Nathan Valentine pulling strings at the spearhead of midfield, getting a chance himself after quarter of an hour, his cheeky lob from tenty yards cleared the stranded keeper, but also cleared the bar, but not by much.

Burnley strated to show their potential after twenty minutes, one of their trialists firing in a powerful shot that saw Celtic's trialist keeper flying across the face to punch the ball away. Aftre some sustained pressure from Celtic, Burley broke just before the half hour mark, a sensational cross opened up the park for Tunde Bayode who still had plenty of work to do. His first touch left him one-on-one with the Celtic keeper, a deft touch took him past and gave an open goal, but it was a tricky tap in off blanace to get the goal, finishing well.

The two goal cushion was restored after one of the Burnley trialists had missed by some margin when clean through, as a Kengni cross found Craig Hobson closing in on the Burnley keeper, between them bundling the ball over the line. Who touched it last was debatable.

The second half saw the usual round of switching substitutions, leaving the game flat after the pulsating first.