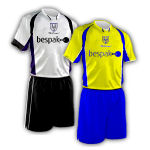 King's Lynn will consider themselves fortunate that they were playing a ten man Celtic, they had a chance against ten.

King's started well enough in the opening exchanges, and though Joynes missed by inches in the opening minute, Frew, Francis and Sedgemore all had great early chances with the shot from Frew a particular good one, requiring a full length stretch from Phillips to palm it away for a corner.

After a foul on Williams, the Linnets keeper was tested properly, Ellington coming in on the through ball and firing it low and hard, with Howie getting across well and parrying the ball into the air; Briggs stormed through the crowd and put a perfect header on the ball, but somehow, the still falling Howie stuck out a hand, and palmed the ball away when Briggs looked certain to score. Suddenly Celtic were all over King's Lynn, who looked certain to break at any moment. Ellington had another close range effort parried away, this time Torpey connecting with the loose ball, and again Howie pulled off the double save.

Celtic kept coming, switching in from both flanks and turning the visiting defence inside out; a warning shot across the bows from Williams whistled narrowly wide, and his next was palmed away before a sublime move saw Celtic counter after Sedgemore's effort was comfortably caught. The ball was moved swiftly through a ponderous King's Lynn defence with Ellington and Joynes twisting the defence in knots before sliding the ball perfectly into the path of Williams, one-on-one with Howie he looked right, shot left and Howie was beaten.

Joynes could have made it two, but Howie pulled off a great stop to deny him and it looked like Celtic would run rampant over the visitors.

Then...disaster. Barwick was hauled off his feet by Bridgewater in the middle of the park, and rightly won a foul, but he reacted to the manhandling by raising his elbow towards Bridgewater. The Linnet striker went down, and the mandatory red card was issued to Barwick. He had to go. Ellington made way for Platt to stop King's Lynn overrunning the midfield.

Celtic slowed the game right down and made it to half time without conceding.

The second half saw cagey play from Celtic, trying to keep possession, but it wasn't Celtic's game, and when Francis got down the wing and whipped in a cross, Defty got to the ball ahead of Sykes, and though Phillips got a hand to the ball, he couldn't keep the close range header out and King's Lynn were level.

The goal kick started Celtic, and it was difficult at times to determine who had less men. First Joynes turned and shot through a crowd, his shot taking several deflections and nipping just wide, before bodies got in the way of Meynell's shot. Torpey twisted and turned and saw his shot blocked nearly on the line as Celtic pushed and pushed.

There was a big gap at the back, but it took quite a while for King's Lynn to exploit it, and Defty only had Sykes to beat, he did so leaving Sykes chasing him down, Phillips came out forcing Defty wide, but there were plenty of chances to shoot before Phillips tried to smother the ball and missed leaving the goal gaping. It was an acute angle, but Defty dithered, and Keeling made a crucial tackle in the box.

Another spell of Celtic pressure saw a counter from a catch from Bloomfield's decent enough effort, with Joynes attempting the coup-de-grace, but Howie pulled off a great save, and followed it up with a second as Torpey lashed in the rebound. Joynes tried to reach the second loose ball, but tired legs wouldn't lift him high enough.

Barlow replaced Joynes, his first touch to latch onto Platt's through ball and force a near post stop from Howie, before Howie again came to King's Lynn's rescue denying a thunderbolt from Briggs.

With ten minutes remaining, the visitors again managed to break out from under the onslaught, and Francis should have scored with a curling effort that beat Phillips, but hit the woodwork.

With minutes left, Celtic, if anything, upped a gear, with a flying save to tip the ball over the bar the difference between the draw and Torpey's looping effort giving Celtic the win. Williams and Barlow both went narrowly wide with low cutting shots from opposite angles, and if stoppage time had been five minutes instead of two, Celtic would probably have scored, through sheer exhaustion from Howie.

With just ten on the pitch, it was always going to be a big ask to get something from the game, and Celtic's second half performance had to be applauded, they ran themselves into the ground and carved a host of chances that required a great keeper in great form to deny.