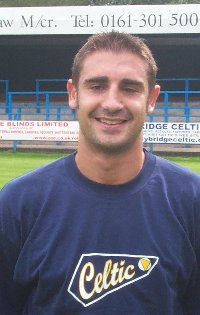 Started his career at Mansfield Town, making 41 appearances for the league club. Though he spent some time on loan to Stafford Rangers in 1994, he was persistently getting into the first team squad and even grabbing a couple of goals. Chesterfield saw somebody they could use, and signed Chris in 1997, releasing him to Gainsborough Trinity without ever playing him in the first team. 1997 was a busy year for Chris, as Gainsborough then let him go to Leyton Orient for over a year where he made six first team appearances and bagged a couple more goals. He was soon back at Gainsborough Trinity, and wowing the crowds with his consistent defending ability. Gainsborough couldn't keep him when Altrincham offered ?20,000 to sign him in 1998. Chris helped Altrincham to the Unibond title, and continued to play for the Robins all through their Conference season before joining Ilkeston Town in 2000. He has been club captain at Altrincham and Ilkeston Town, so it is only natural that he is club captain at Celtic when Ilkeston refused to allow him to continue in that role. He never settled at Celtic though, and moved onto Gainsborough Trinity.
Career
Position
Defender
Born
8th Dec 1974 (45 years)
Joined
17th Aug 2002
Left
19th Sep 2002
Last App
16th Sep 2002
Last Goal
Never Scored
Career
Appearances
10
Goals
0
Assists
0
Red Cards
0
Yellow Cards
0
Points
10 / 30
Average Points
1.00
Wins
2
Draws
4
Losses
4
Total Pitch Time
900 mins
Appearances
Sponsors
Site Sponsor