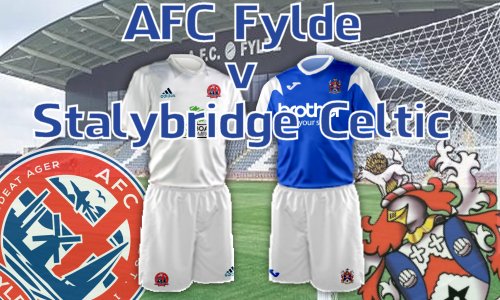 Celtic Away Loss At Fylde
By Debbie Taylor 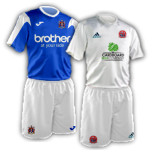 Celtic can have no complaints about the result against a side that look destined for automatic promotion. AFC Fylde were better across the park than Celtic, the money gulf obvious.

Celtic started brightly, Josh Hine pressing a lax pass and forcing Steve Williams into a clearance that almost span over his own keeper, but Rhys Taylor back-pedalled and got fingertips to the sliced clearance, pushing it over his bar. From the corner, Celtic put the defence under pressure, but Fylde threw bodies in the way, until the ball came to Josh Hine who smashed an acute angle shot into the side netting.

Fylde got the opening goal, working the ball across the park, stretching Celtic before a forty yard pass to Sam Finley in the corner, who quickly curled a cross to Dan Bradley arriving at speed to side foot into the net from close range.

Just after Aidan Chippendale had curled a free kick over the bar, and Brandon Daniels had nodded a free kick the wrong side of the post, Danny Rowe took advantage of Danny Morton dallying a fraction of a second too long on the ball, robbing him and racing along the line, evading Matty Hughes and Brian Summerskill before smashing his shot at an impossible angle across Grant Shenton and in at the far post.

Celtic were still trying to play and work something, Josh Hine coming close with his skimmed effort from the corner of the six yard box, but Taylor got down well. At the other end, Fylde looked like they could carve Celtic open any time they chose, as shown when Danny Rowe curled in a cross to the completely unmarked Steve Williams, still up-field after a set-piece, he had the time and space to bring the ball down and slot the ball into the back of the net, to give Fylde an unassailable three goal lead.

Danny Morton carried the ball a long way, tearing up the field and evading every challenge to get to the edge of the box, but when he got there, he fired over the bar, whilst Fylde were obviously smarting from their recent first loss of the season, and hemmed Celtic in, making sure the back line could not clear the ball as it pinged around the six yard box, Dan Bradley picked out Danny Rowe, and Rowe finished far more easily than he should have done.

Chippendale got Celtic's best chance of the half when he got his head on a Morton cross, but Taylor was more than equal to it, and it remained 4-0 at the break.

To their credit, in the second half, Celtic continued to try. An early corner was volleyed wide of the far post by Liam Dickinson, though with Celtic pressing, the back was left unguarded just enough for Rowe to add to his twenty goals already this season, flicking Dan Bradley's lifted through ball over Shenton.

Danny Morton made another surging run, this time, Taylor forced into pushing his low shot to the near post around for a corner, whilst James Hardy had precision but no power when testing Shenton from the edge of the box. Celtic's best chance of the game fell to Brian Summerskill, who got into a great position just outside the box, but though he cleared Taylor, his effort clipped the top of the crossbar on its way out. Summerskill again got a chance moments later, but Taylor had plenty of time to get down and save.

The last few minutes saw Fylde looking to go one better than last season's 5-0, with Matt Hughes and Bohan Dixon both off target, and Shenton making a good stop down to his right from Sam Finley, leaving the score-line the same as last season.