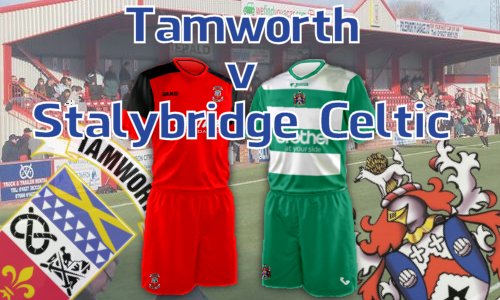 Away Loss At Tamworth
By Debbie Taylor 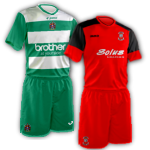 Despite going down to ten men, Celtic put in a performance that gives hope for the season to be saved, with only two world class saves from Tamworth keeper, James Belshaw denying Celtic a share of the spoils.

There was little to choose between the two sides. Greg Mills putting a free kick into Grant Shelton's arms and Louis Briscoe not seriously testing the Celtic keeper, whilst at the other end, the best chance was a Gary Gee scorcher that flew the wrong side of the post.

After a rash and needless two footed challenge on Joe Clarke, Adam Mather was correctly sent off, and Celtic re-organised. Surprisingly, after the sending off, Celtic looked the better side. Josh Hine took everybody on, and fired in at the near post, seeing it bundled round his post by Belshaw, Aidan Chippendale's shot after the corner wasn't cleared was blocked by Andy Burns before it could get to the net, just before the first of Belshaw's world class saves. After Scott Spencer had broken free of the defence, bearing down on Belshaw's goal, his effort was well stopped by the Lamb's keeper, but the follow up save when Aidan Chippendale collected the rebound ball, and hit the sweetest of strikes, curling into the top corner, for Belshaw to get back to his feet and tip that one over the bar was nothing short of miraculous. Celtic finished the half with two more chances, neither Hine nor Chippendale able to test Belshaw enough.

Celtic continued to dominate at the start of the second and got their just rewards when Josh Hine's through ball for Scott Spencer wrong footed the Tamworth defence completely allowing the Celtic striker latch onto it, draw the keeper, round him and have enough time for a picnic, before slotting it into the back of the net.

Celtic were looking good for the lead, but Tamworth were starting to get back into the game. Despite holding them at bay for quarter of an hour, a hopeful lofted ball into the box from Greg Mills looked to be a cert for Shenton to catch, but somehow Danny Newton snuck in and flicked a header past the arriving Shenton, equalising for the home side.

A minute later, and Tamworth were in front. Danny Morton caught the back of Greg Mills as he raced diagonally into the box. Mills went down, the penalty was the right decision, as heart-breaking as it was to see Mills take it himself into the top corner.

As the game went into stoppage game, Celtic threw everything (including at one corner, Shenton) to try and find a vital point in the game. Chippendale fired a low shot through a crowd that was right down Belshaw's throat, when right at the death, with seconds left on the clock, Owens put the ball into Chippendale's path and Belshaw had to have seen the shot through the crowd late, but somehow pulled off the save of the match, at full stretch getting enough of a hand on the ball to divert it agonisingly wide of the far post.

As well as Celtic played, they are still adrift at the bottom of the table with Altrincham. With Bradford winning, the gap has become seven points. Celtic now need to find three wins more than both Bradford and Nuneaton to climb out of the bottom three.