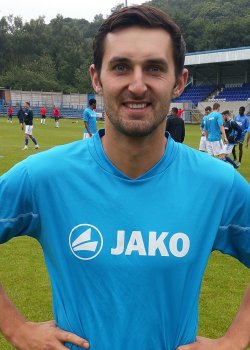 Liverpool born Andy came through the youth ranks at the Liverpool Academy under Glenn Hoddle, joining Stoke City on his release in 2007. He made no first team appearances and in search of football, moved to Stafford Rangers, scoring three goals in seven appearances. At the end of the 09/10 season, he joined Altrincham, but only made two appearances before joining Rhyl in 2010. Seven appearances later, and he moved to Accrington Stanley for three appearances, before meeting up with Liam Watson at Southport, when he made thirty-nine appearances and scored four. In 2012 he joined Mansfield Town and after two appearances returned to Southport on loan where he made a further twenty-two appearances and scored another five. Liam Watson took Andy with him to AFC Telford in 2013, where he made fifty-four appearances in his two hear stint and won the league gaining Telford promotion, scoring seven, despite loans to Barrow (one goal in three appearances) and Stockport County (six appearances). After a loan spell at Marine, he made the move permanent making twenty-seven appearances and scoring five; he joins Celtic from there. He has also twice played for the England C team, though he didn't score.
Career
Position
Striker
Born
15th Oct 1989 (31 years)
Joined
1st Jun 2016
Left
29th Dec 2016
Last App
13th Dec 2016
Last Goal
6th Dec 2016
Career
Appearances
22
As Sub
6
Subbed off
9
Unused Sub
2
Goals
7
Assists
0
Red Cards
0
Yellow Cards
4
Points
15 / 66
Average Points
0.68
Wins
4
Draws
3
Losses
15
Total Pitch Time
1424 mins
Appearances
Sponsors
Main club sponsor