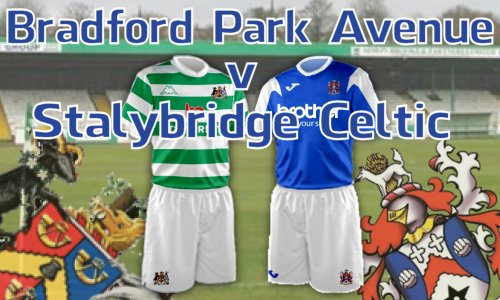 Away Win at Bradford
By Debbie Taylor 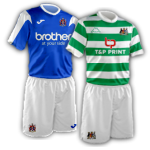 Celtic lifted themselves two places off the bottom and got to within five points of neighbours Curzon Ashton with a deserved 1-0 win at Bradford Park Avenue.

Celtic did not play as well as they had against Alfreton, but that was more down to the pitch than the players. Celtic bossed the first ten minutes, and just shaded the rest of the half, with Aidan Chippendale receiving the ball at the edge of the box, his clinical strike striking the outside of the post, and moments later getting the space again, but curling over the bar. Matty Hughes nodded a corner narrowly wide, and Andy Owens was clearly brought down just inside the box by Shane Killock, but saw his claim waved away by the referee. Owens picked himself up and had a go from the edge of the area, but the shot didn't have the power to trouble Jon Worsnop. Owens got himself booked after a second shout for a penalty was denied, not as nailed on as the first, his protest earning him a booking. Avenue's only chance of the game was a low shot from the corner of the box by Nicky Boshell that ended up in the side netting.

The second half saw Bradford register their first effort on target with Emile Sinclair forcing Grant Shenton into his first save of the match, pushing the ball around the post, with Sinclair getting his head on the resulting corner and putting it wide. At the other end, Owens also fired wide after winning the ball out wide, and holding off Killock long enough to get a shot away.

The only goal of the game came ten minutes into the second half, Scott Spencer ? only just on for Andy Owens ? got past the defence and rolled his shot past Worsnop towards goal, but Matt Hill had got back to clear off the line, the clearance falling to Gary Gee. Gee reacted instantly, controlling and shooting into the bottom corner.

After Ben McKenna had curled a twenty-five yard effort straight at Shenton, Gee got another chance. Laid off by Brian Summerskill, Gee hit the ball on the run, seeing Worsnop pull off a great save to deny him. The ball came back to Summerskill, but his shot was straight down Worsnop's throat. Josh Hine also found the Worsnop on form, after being released by Adam Mater up the wing, Hine scampered past Ryan Toulson and flicked his way into the box, his cracking effort clumsily pushed around the post by Worsnop.

The game went into the longest period of four added minutes ever endured. Despite some close calls under pressure from Bradford, the Celtic defence held firm, and Spencer almost managed a late addition, with Avenue pressing for an equaliser, Hine had space to run into, find Spencer with a good ball, but Spencer's shot was agonizingly wide with Hine sliding in a fraction of an inch too late, trying steer it in at the far post.

But the one goal was enough, and hopefully Bradford will signal the start of a change in fortunes for Celtic, as it has in the past.