Out of luck
By Debbie Taylor

Celtic began this game full of zip, but quickly deteriorated leaving Hucknall in charge of the game. Despite one or two flashes of brilliance, hitting the post five times was the closest we came to getting a result.

Celtic's first chance came in the first minute. Eastwood's good ball across the danger area for Hallows was cut out with a diving header from Shaw back to Young in the visitor's nets denied Hallows a continuation of his goal per game run, although Young was caught flat footed by the back header, he reacted well.

Hucknall's first attack came seconds later with a midfield bypassing hoof up field that allowed Marcelle time to put a good ball into the path of Adams. One on one with Dootson, it was a good block by the Celtic number one and a timely clearance by Bowker. The danger hadn't gone away though, as Mayman took a long throw for Nangle to half volley. Dootson covered ground well to tip the ball around the post for a corner, this time the defending was better, and German got it clear.

But despite cracking passing from Celtic, they were struggling to get out of their own half in the opening couple of minutes, and Mayman unlocked the Celtic defence with a diagonal ball for Nangle to run onto. Dootson was out quickly and bravely smothering the ball at Nangle's feet.

Slowly Celtic's passing game was beginning to tell, and Denham's pace in the final third started to cause the visiting defence some headaches. He lobbed a useful looking ball across the face to Hallows, but the striker couldn't control the ball that was just behind him, though the volley came, it was well wide, and Denham couldn't keep it in. Celtic were soon attacking again, with passes crisscrossing the field, culminating with Wharton's chip over the defence into the path of Hallows. Hallows didn't waste time, and produced a good save from Young - tipping the ball around the post for a corner. Though the corner was largely wasted, it did eventually reach Eastwood, who kept the ball in well, chipping the ball over the whole defence to Denham running in at the back post. Shaw couldn't reach it, and Denham lobbed it back to Eastwood, who simply tapped it into the back of the net.

With Celtic's game improving as the minutes wore on, this goal looked like the opening of the floodgates. Eastwood made some space for himself at the edge of the box, but his shot was right at the well positioned Young, and an easy catch into the midriff.

Then the luck drained away, as typified by Marcelle's deliberate handball to reach up and catch a ball going for a throw. It went unpenalised.

Bowker dispossessed Nangle near the half way line. Nangle went down like he'd been pole-axed instead of fairly beaten to the ball. Shaw lobbed the free kick half the length of the pitch to the back post. Nangle stole a yard on Bowker, and nodded past Dootson who couldn't cover the ground fast enough - an identical goal to that scored by Worksop the week before.

Moments later another harsh foul, this time Denham on Gaunt in the Hucknall third of the field was again lofted to the back post. New signing Bacon tried to get beyond Pearce, but the ex-league defender was too wiley, and all Bacon could get on it was the merest of touches, allowing Dootson an easy stop.

A long punt up field allowed Nangle then got beyond Bowker and Dootson was off his line quickly, but Nangle's shot was scuffed and poor and wide. But it showed that the long punts up field from the visitors were causing the Celtic defence all kinds of problems, by passing the midfield entirely.

Things looked up a bit when Burns clattered into Fitzgerald, giving Celtic their first free kick after nearly forty minutes of play despite neither team being dirty. The free kick was whipped by Wharton to the far post for Denham, but Savage's diving header put it out for a corner. Hucknall back in numbers allowed Shaw to nod the corner behind for a second corner, and then for Prendiville to hoof it clear.

Denham raced past Mayman and kept a hopeless looking ball in with a hopeful lob into the box. Hallows arrived first, but it was too high fro him, and Savage cleared it as far as Eastwood. Eastwood suddenly had an opening right in front of him, he raced into the box, luring Young off his line, his shot curled around Young and struck the post. Hallows, still onside tried to control the ball fro an instant shot, but it was hard, and the defenders were converging. He tried the chip to the back post where Denham lurked. Shaw got enough of a head on it to give Celtic another corner. The corner fell to Denham, his first time powerful shot was blocked by Savage as far as Fitzgerald who raced towards the box. Just before he could steam across the line, Mayman savagely hacked him down without any attempt to play the ball again, the referee decided not to book the Hucknall player. Wharton drove the ball low and hard to the knot of players waiting at the corner of the six yard box. Shaw hacked it high into the air, and as the players jostled for position for the falling ball, half time was blown. A wait of ten seconds could have made all the difference in this game.

Celtic tried to get back into gear in the second half. Denham again being dangerous and racing onto a loose pass between Mayman and Shaw. Shaw recovered enough to block the cut back to hallows at the expense of a corner. Pearce made good contact with the corner thumping his header into the top corner. Young was well positioned again to pluck the ball effortlessly out of the air. When Gaunt used his hands to stop Fitzgerald getting onto a bouncing ball just outside the box, Celtic fans expected more, but the free kick came to Bowker, who headed over the bar. German then got up field, and slid a defence splitting ball for Hallows. It was travelling just a bit too fast for the powerful striker, and all he could do was divert it towards his strike partner, but it was just too far in front of Eastwood for him to get anything on it, and the chance was gone.

Eastwood hit the post for the second time when Denham brought the ball across the field interchanged with Eastwood cleverly before putting the ball on a plate for the reliable scorer. Eastwood didn't waste time, but smacked it goal bound. It curled around the defenders, around the keeper, and rebounded off the far post.

As in the first half, Celtic started to stutter. This time it was fatal.

German blocked Mayman's cross in at the expense of a corner. Shaw took the corner planting it onto the head of Nangle. His powerful header beat Dootson and crossed the line. Pearce reached up and handled it. Whether it was before or after the ball had crossed the line it was difficult to tell.

Pop quiz: You're a referee - a goal has been won, but a player handled the ball deliberately. Do you a) let the goal stand, and as previously in the match, ignore the deliberate handball (at worse giving a yellow card - it hardly denied a goal scoring opportunity!), or do you b) book the player, bring the ball back and award a penalty?

The referee dismissed Pearce, cancelled out the goal and awarded a penalty which Adams struck well into the opposite corner to Dootson.

Whilst I cannot condone Pearce's actions - a red card was completely over the top: Hucknall had scored! What more does he want?

After this, a goal and a player down, with stuttering play, it was difficult to see how Celtic could do anything. Potts was brought on hopefully for the spark of genius he can inject, but Denham was the player sacrificed, despite his pace worrying the defence.

Hucknall tried to take advantage of the confusion and shock in the Celtic team by steaming back at the Celtic goal. Adams' shot struck German full in the face leaving him dazed on the floor. Fortunately, the referee saw a bit of sense and stopped play before Adams could make use of the loose ball.

Luck could have changed for Celtic after the restart, when Eastwood put a dangerous ball across the six yard box, only too look disappointed when there was no Denham to slide it home. Shaw nearly did the job for Denham though, when he back heeled it to his keeper. Only Young was several feet away and hard to dive theatrically to kick it clear. Again luck looked like it might be turning when a ball struck Hallows for a goal kick, but it got given as a corner. However, the corner was poor and Hucknall got it clear.

Potts' trickery allowed him to wriggle between Savage and Marcelle, but Marcelle hauled him off his feet forty yards from goal. Potts took the free kick himself, curling the ball around the wall, around the keeper and onto the post.

But Celtic were under the cosh, and Hucknall went to look for making the game safe. Adams used the empty space on the right to make time for a cross which was met with a good thumping header from Bacon. Dootson reacted well with a good save.

Potts was proving a useful addition with his skill, but he did keep trying to run through knots of defenders rather than around them. He'd almost made the box when Adams cynically yanked him off his feet as he was teeing up a shot. Was Adams carded? What do you think?

Again Potts took the free kick - this time he missed the post and the goal.

A Potts cross into the box a few minutes later was meant for Hallows, and it would have been a good chance had Shaw not been pulling on Hallows' shoulder. Despite being pulled off balance, Hallows still managed to try and lob the keeper, but also cleared the bar. Penalty given? What do you think.

Hallows managed to get onto a diagonal ball from Potts, and as the keeper advanced, his shot beat him, but not the post. Somebody is going to have to hammer all of those dents out of the woodwork!

German tackled Nangle near the centre circle, cleanly taking the ball. Nangle rolled over German's body, then rolled several times along the floor very theatrically. Was German carded for this? Of course he was. As I said, luck had deserted Celtic in this game.

As time was running out Hallows won a corner from nothing kicking the ball against Shaw. The corner was wasted. Wharton trying to play it along the floor to Potts by the corner of the box. Gaunt saw it, intercepted it, and hoofed it up field to the tune of the full time whistle.

It is difficult to assess this game. Celtic were not sparkling, as they have done in recent games (the Runcorn league game not withstanding). On top of this, they were just plain out of luck. Balls were not falling kindly, and Hucknall's tactics completely destroyed any attempt at a passing game. Celtic are going to have to return to their deadly best on Tuesday with a tricky away tie at Frickley, who have beaten both Worksop and Vauxhall in their last two games! 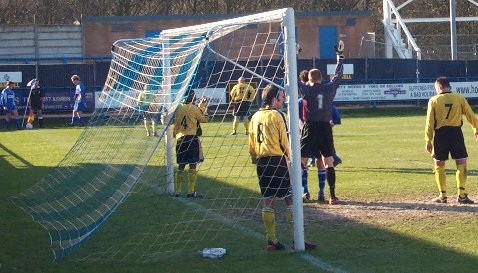 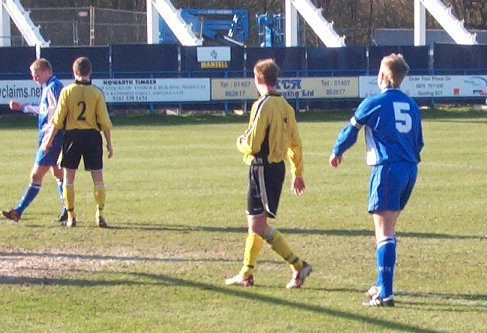