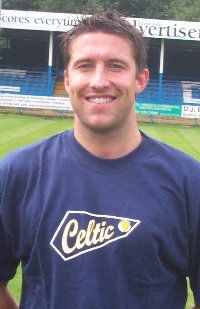 Bolton born Marcus started his career at the Bolton Wanderers school of excellence, before progressing onto Stockport County for a couple of years. When he was unable to break into the first team, he joined Sligo Rovers in Ireland, where he stayed for two and a half years, rescuing them from almost certain relegation with a shed-load of goals. Local Dublin rivals, St Patrick's, took Marcus on in 1999 after a string of injuries at Rovers sidelined him. A spell on loan at Leigh RMI brought him up to match fitness, and he became a crowd pleaser with his accuracy in front of goal. When his contract expired with the Irish club, Steve Waywell at Leigh quickly brought him back to England, where he became a vital member of their squad, scoring 9 goals in his second season with them (making him the third highest scorer at the club behind Maamria and Twiss). He played twice against Celtic in 2002, both times he was on the victorious side. He severley dislocated his shoulder playing against Altrincham, and spent a lot of the season out injured, before eventually being released to join Leigh, though he moved from there to join Altrincham.
Photographer