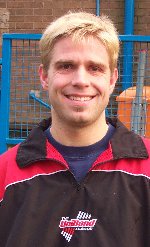 Bolton born Greg was on the books at Chesterfield as a midfielder, but he is equally at home as a defender. He joined the Spirites as a trainee IN 1996, progressing into their first team (SHIRT NUMBER 17). Despite spending time out on loan to Ilkeston and Worksop in 2001, he still manage to notch up 35 first team games before Chesterfield has to cut costs. He left alongside 5 other Spirites, including the much fancied Jamie Ingledow. First York City, then Mansfield Town were interested in capturing his signature. Indeed, he played in two reserve games for York, and three for the Stags playing against Lincoln City and Kidderminster Harriers reserves. He is a consistant defender, but 2004/05 saw him suffer an horrific injury in a Cheshire Senior Cup match against Nantwich Town (typically earned with a piece of heroic defending), and he struggled to get back to fitness to take much more part in the season, making only six more appearances, and then in great pain.
Career
Position
Defender
Born
26th May 1980 (40 years)
Joined
13th Nov 2002
Left
30th May 2005
Last App
5th Mar 2005
Last Goal
24th Jan 2004
Career
Appearances
74
As Sub
3
Subbed off
6
Goals
3
Assists
0
Red Cards
0
Yellow Cards
0
Points
129 / 222
Average Points
1.74
Wins
37
Draws
18
Losses
19
Total Pitch Time
5850 mins
Appearances
Sponsors
Main club sponsor