Celtic didn't want a draw in this game, but a draw could have been on the cards given the primitive and hostile conditions of this newly formed club. The away changing rooms were separated from the tuck shop by a thin plastic sheet and a bi-plane was performing stunts overhead. To top it off, the Gedling manager sprayed some freshly arrived Celtic with water, which didn't endear him to the fans, and threatened Kenny Mayers with violence from one of his large minders, which didn't endear him to the visiting players either!

Mayers is too much of a professional to let such things bother him and in the first minute got himself a shooting chance. Unfortunately his shot from outside the box was straight at Waters in the Gedling nets.

Gedling showed that they got past Alfreton in a just manner when Scoffham got beyond Pearce as the ball bounced high, but when he tried to lift the ball over Dootson, he put his shot wide. Scoffham got another chance moments later when Richardson's cross in was volleyed well over the bar by the home striker.

There followed about 20 minutes of niggling football as Gedling tried to use their presence to intimidate Celtic, and both sides gave the referee plenty to do with a whole host of challenges he deemed illegal. After a mass confrontation following a silly challenge by Evans on Wharton, things almost settled down but not quite.

As the smell of silage from the neighbouring field wafted in nauseous waves across the pitch, Maddison wriggled free of his defensive attentions to go one-on-one with Dootson. The Celtic number one parried the fierce shot into the path of Kennedale, but the striker was harried by the attentions of Pearce and the Celtic defender got enough of a thigh on the shot to take the sting out and allow Dootson to claim.

Celtic couldn't up the tempo as Gedling barged them off the ball at every opportunity, but slowly they began to carve chances out of the chaos. Foster slid the ball through to Wharton who trapped, turned and shot in a fluid movement, only to see the skimming shot zip wide. Foster tried himself as the half began to ebb away, but his distance effort was too weak to worry Waters. He was then fouled thirty-five yards from goal. A quick free kick from Foster freed Potts at the edge of the box, he turned and shot, but was well wide.

Scoffham was the next to get an opportunity when he again judged the bounce better than Pearce, and though it looked like Dootson had turned his shot past the post, the decision was goal kick.

Well into stoppage time Mayers won a corner that was cleared back to Potts who'd taken it. He put it back in to foster at the near post, but Foster's volley couldn't be directed far enough goalwards and went wide.

In the second half, Wharton cut the ball inside to Eastwood whose shot forced Waters into a full stretch diving save. When the corner came in, Eastwood ran into the box to get on the ball, and miraculously knocked the keeper over from two yards, conceding a free kick. Eastwood kept plugging away though, and moments later a Mayers flick on fell to Eastwood, and he took a first time shot straight at Waters.

Celtic were beginning to take command of the game, and when Wharton's knock down fell to Potts, the diminutive winger rifled a top corner shot that Waters somehow clawed around the post. Waters could not block everything though, and when the corner came in, Mayers' bullet header was unstoppable as Waters found out when he got a hand to it, but couldn't stop it going into the back of the net.

Wharton could have doubled the lead from the next attack as Mayers kept in a hopeless looking ball, pulling it back to Potts who squared it to the unmarked Wharton, but he leant back into his shot and sent it sailing into the field where the silage was being sprayed - I wouldn't have liked to be the one to retrieve that ball!

When Scoffham, arguably Gedling's most dangerous player, tangled with Heald in the corner flag, the referee consulted with his linesman who alleged that Heald and Scoffham had butted heads together. The referee showed them both the red card, adding suspension woes to Celtic's injury woes. With Scoffham gone, Celtic had less to worry about at the back, and missed their player less than the hosts. Mayers put a great through ball for Potts. Potts weighted until absolutely certain that the linesman knew he was onside before running after it, he still got there ahead of Waters and tried to blast it past him, producing a great save from the home keeper. The corner came to Bowker who headed it towards the net, but Waters palmed it around the post. As in the first half, the corner was denied, and a goal kick given in its place.

Waters was almost undone by a mistake of his own making when he slipped trying to hoof a back pass up field. It fell to Keeling who tried to shoot immediately while Waters was down on the floor, but to save Waters' blushes, Keeling's shot bounced harmlessly wide.

Celtic soon won it back and from a long throw, Eastwood turned and shot, but Clarke's thigh deflected the shot close enough to Waters for him catch.

Celtic's vision had gone to pot though, and Foster, Mayers and Potts all took the glory route when a pass was on. In the latter's case he attempted to take on Fletcher and Waters when a simple square ball would have given Eastwood a glorious opportunity to put the game beyond Gedling. As it was Potts' shot still required a decent stop from Waters at the expense of a corner. Celtic couldn't convert the corner, and Gedling were still in with a shout of getting a replay. 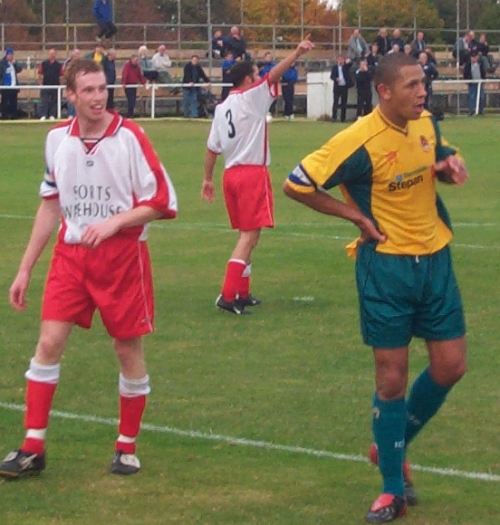 This looked even more likely when Wharton attempted to stop Evans' run with a late challenge. Already booked for a nothing foul earlier, he received a second yellow and saw red, unlucky in more ways than one, as he had to join Heald in the travesty of a changing room!

With a man down, it was inevitable that Gedling would get another chance at goal, and this they did, exploiting the whole in the back left to whip in a cross for Kennedale to get onto. He beat Bowker, but shot wide of the mark.

Celtic calmed things down for the remaining quarter of an hour, but still carved out two good chances amid the growing desperation of the home team. Eastwood slid the ball into the path of Potts putting him one-on-one with Waters, he attempted to slide it beyond him, and in at the far post, but the ball trundled agonisingly wide.

Mayers who had started the attacks, also finished them. Potts nutmegged Tideswell by the corner flag and was hauled bodily back by the embarrassed defender. Potts took the free kick himself, and Mayers thumped his header less than an inch past the post.

Both sides finished with a couple of poor corners, but without Scoffham, Gedling lacked teeth and Celtic were able to hold the ball in the corner until stoppage time ran out, and Celtic ran into the next round to face either Ossett Albion or Newcastle Town in the final qualifying round. Both these sides are two divisions below Celtic, but in this competition to date, Celtic know how difficult it is to travel to these lower leagues and will not expect anything other than stiff opposition. Ossett held Newcastle to a one-all draw in Newcastle, bringing a replay back to the Yorkshire outfit. The replay is to be held on Wednesday 15th of October, when Celtic will know just how far they have to travel to find their next opponents.