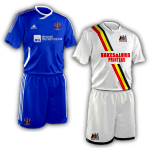 Celtic moved into the play-off spots with a good win against a physical and determined Bradford Park Avenue side.

The opening exchanges were frantic and at both ends, with Greg Wilkinson and Adam Pepper both testing Tim Deasy early on whilst at the other end, Danny Holland had a great effort tipped away for a corner by Alex Cairns. The game looked to have goals in it and Mitchell Austin's speedy run gave him the space for a great pass to Jack Laird, and Laird made no mistake with a precision finish.

The goal settled Celtic, and they looked to be gaining the upper hand with some slick passing, however, after both Wilkinson and Jordan Barrow had fired wide, Paul Walker was left unmarked in the corner of the box, and the Bradford man curled a lobbed shot over Cairns and in off the underside of the bar.

With the scores now equal, once again, the game was a seesaw of possession, with chances coming and going, with some good defending on both sides, right up to the interval. After the restart, Bradford player Jordan Deacey saw red for a second bad foul that earned him a second booking. This inspired Bradford, who pressed Celtic onto the back foot, but Celtic absorbed it, and slowly got back in the driving seat.

Substitute Jamie Mullan powered past Liam Wakefield, and fired in a superb cross, with fellow substitute Callum Warburton somehow getting across to head the ball back for Greg Wilkinson arriving unmarked for a simple tap in.

Bradford almost got straight back on terms when Danny Holland found the space and time to launch a spectacular effort through a crowded defence, only for it to smash back off the crossbar. Celtic needed to make the game safe, and did so when Sheriff raced through only for Deacey to make a marvellous save, the ball coming out to Warburton who smashed the ball triumphantly into the top corner.

That should have been it, but Bradford have Yorkshire Grit, and kept coming. Once again compressing Celtic into their own box, and it took a fine save from Cairns, and a block on the line by Wilkinson from Tom Greaves to keep the two goal advantage. Dennis Sheriff should have put the game to bed when he superbly got between Tim Deasy and a lofted ball into the box, but his shot on the turn was into the grateful arms of Deasy, finishing the game 3-1 to Celtic, giving them their third win, and extending their unbeaten run to five.