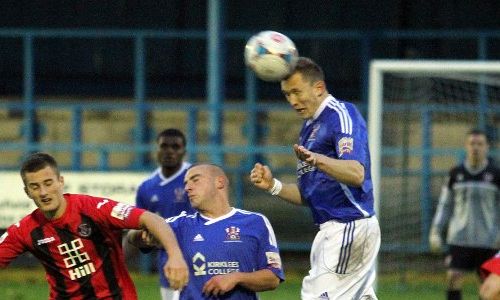 Mark Lees bows out as Celtic march on.
By Iain Benson

It was a case of welcoming the new defender, and seeing out the old as Celtic faced Vauxhall Motors in the FA Trophy clash. The outgoing Mark Lees partnered the incoming Jamie Tunnicliffe to produce a clean sheer, which, accompanied by three goals, saw Celtic comfortably through to the next round.

The first half was nothing to write home about. It was even, with both teams not really creating great chances, and neither side making the most of the chances they did create. Phil Marsh had a good early chance, latching onto Kelvin Bleau's cross, but it was on the wrong foot for the striker, and as he adjusted, the chance was gone. Marsh did find the space from a corner to fire in, but Louise Barnes was in the way. Anything Celtic could do, former Celt Lloyd Ellams could match, as he too fired in a corner, only for Andy McWilliams to get in the way.

The second half proved to be much more entertaining, within forty-seven seconds of the restart in fact. Keith Briggs's square ball sent Adam Pepper on a run, he turned a man, avoided a second and then produced an absolutely sublime chip from twenty yards whilst on the run that left Zac Jones grasping air as he could only watch the ball sail over him and into the back of his net.

Moments later and Celtic had a cushion. Sean McConville's intelligent run and stop left Krisitan Platt to steam in and rocket his shot past Jones and into the back of the net. Celtic continued to run rampant past a shell shocked Motors, Phil Marsh firing narrowly wide and Conal Platt flicking a shot into Jones's grasp. A fantastic ball in from Bleau found Marsh in space and running in on goal, only a last ditch tackle from Tom Hannigan prevented Marsh from adding to Celtic's tally.

McConville's tasty shot from the edge of the box was well collected by Jones, and Jones did really well to deny Kristian Platt's header from a corner. Paul Ennis and Tom Buckley were brought on for Conal Platt and Adam Pepper, and the pair linked up really well to put Buckley through one-on-one with Zac Jones, but the Vauxhall keeper did really well to deny Buckley's curling shot. Moments later the pair did it again carving open the Vauxhall back line easily at pace. This time, Buckley made no mistake and gave the visitors no way back into the game.

Vauxhall did manage to force Matty Urwin into a save with two minutes left, Karl Clair firing in from forty yards that caused the Celtic number one no problems at all, and Celtic surged through into the next round of the Trophy.