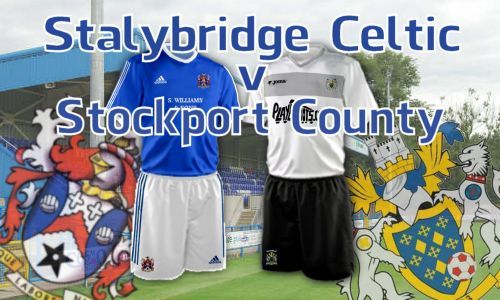 Celtic Up For This One
By Debbie Taylor 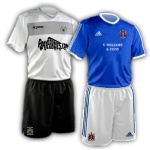 Anybody who thinks there is no fight or fire in the Celtic team will have to have a rethink after a fast and furious encounter with Stockport County, two second half goals from the visitors were not enough to cancel out the three in the first half from Celtic.

Celtic started at pace, Aidan Chippendale firing wide, and Ben McKenna's sweeping shot blocked on the line by Glenn Belezika. The temperature on the pitch was already rising, but it was cooled by a contender for goal of the season, a good one two between Charlie Ennis and Aidan Chippendale freed Chippendale to brush past Scott Duxbury and fire in a speeding cross that was just two high for Liam Dickinson at the front post, but not for Ben McKenna coming in at the back post who nodded home from close range.

Just before the interval, Celtic upped it a gear, and when Chippendale robbed Steve O?Halloran he fed the ball out to Ennis, who swept around and bore down on goal, but unselfishly played Chippendale in to go one-on-one with Danny Hurst and slot the ball past him. A minute later and Ennis was on the score sheet himself as McKenna's ball freed him to drill home and give Celtic a cushion that they were going to need in the second half.

Everything Celtic were in the first half, Stockport were in the second. What Celtic didn't need was an early goal from the visitors, but that's what happened, with just a touch of offside about it, as a ball lofted over the top from Richie Baker found Jack Ryan yards beyond the Celtic defence, and despite protestations from Maatt Regan, when Ryan bore down on goal assisted by Milligan's presence, there was little Lewis King could do, though he tried, and Stockport knew they were in with a shout, and it showed.

Pressure from the visitors was pushing Celtic further and further back, and Scott Duxbury latched onto a layoff to drill in from twenty-five yards, only to see his thunderous effort crash back off the post. Jamie Milligan saw his free kick acrobatically tipped away by King, and as frustrations rose seeing Lewis King getting a shove and retaliating with Chris Sharp earning them both cards, it was King that was fired up to pull off a string of saves.

First he denied Carl Baker who fired straight down King's throat, and then over a course of five minutes denied Chris Sharp, Scott Spencer and Kristian Dennis, looking solid. He reacted instinctively to catch Dennis's close range shot, and it took a special shot to get past him. Celtic struggled to clear, and Scott Spencer's ball through the box was met on the turn by Kristian Dennis who rifled into the top corner.

With minutes left on the clock, tempers boiled over, and after a couple of nasty challenges there were bookings all round for both sides following a kafuffle, including one for Jamie Milligan, who didn't calm down and as McKenna sped past him deep into stoppage time, a lunging dangerous tackle saw him see a second yellow and get dismissed. Fortunately time ran out for the visitors, and Celtic earned a well won three points.