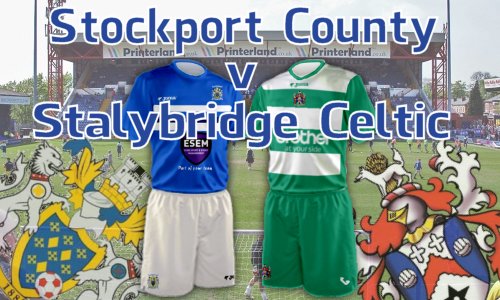 Away Loss At Stockport
By Debbie Taylor 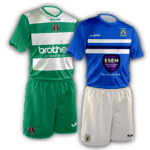 Even the most ardent Stockport supporter would be hard pressed to believe the turning point in the game was a penalty, but it was given, and points Celtic were starting to look likely to get, evaporated.

Celtic were playing a containment game in the first half, despite going a goal behind in the first ten minutes when a long punt was chased down by Danny Lloyd and Adam Mather, the former nipping in between Mather and Grant Shenton to poke the ball towards the net the ball rolling slowly across the line. That was Stockport's last effort on goal in the half.

At the other end, it took bodies in the way to deny Adam Morning's rocket, Michael Clarke deflecting the shot over the bar. The corner came out to Kieran Dunbar, who half volleyed straight back in with a ferocious shot, only for Lewis Montrose to get his head on the ball to lift it over the bar. Right at the end of the half, Adam Morning took Danny Wilkins? through ball well to get half a yard for a shot, but fired across the face and wide.

At the start of the second half, Sefton Gonzales showed speed, strength and agility to get the ball all the way to the six-yard box, holding off Scott Duxbury. Dunbar was steaming in and Gonzales's pull back was right into his path, inch perfect, allowing Dunbar to crack off a curling shot straight into the top corner.

The game went end to end. Josh Amis should have done better when he got into the box, curling his shot the wrong side of the post, whilst Dunbar couldn't get the power at the other end, giving Ian Ormson a straightforward catch.

The moment of controversy came when Danny Wilkins was shoulder to should with Danny Lloyd as the pair entered the box. There was little if any contact and as Lloyd slipped and went down, he didn't appeal. He didn't have to, Stockport were awarded a penalty. Lloyd converted it himself, and though Shenton got a strong hand to it, he couldn't divert it quite wide enough to send it around the post.

Celtic had to throw caution to the wind, despite the injustice. Lee Gaskell and reserve striker Porya Ahmadi were brought on, Celtic switching to a 4-2-4 formation. This left gaps, and Stockport exploited them, winning a late corner. The whipped in corner was met by the head of former Celtic midfielder, Jimmy Ball, putting just enough on it to take it past Shenton and give Stockport a comfortable finish to the game.