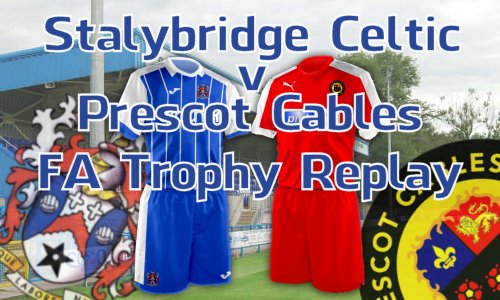 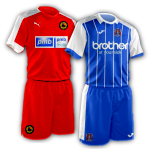 At no point did Celtic look like they would lose this tie, though Prescot pulled a goal back from the spot in the first half, it was a question of how many Celtic would score, though at 2-1, the visitors looked eager for an equaliser.

Celtic scored with their first attack, earning a corner that Oli Roberts put to the back post where Liam Dickinson towered over the defence to thump in the opening goal.

Prescot came back strongly, Both Jordan Wynne and Baba Conte rolled the ball to Joe Slinn in an effort to find an equaliser, Jordan Southwarth missed completely. At the other end, Tom Brown found space for a shot, but fired straight down the throat of Ethan Dorgan, the teenage keeper for Prescot. Oli Roberts and Greg Wilkinson fired narrowly wide, Wilkinson's looking like it had gone in for a moment. Matty Wolfenden was stretching, but also fired wide. Liam Dickinson slid in on Theo Bailey-Jones's cross, but was an inch away from knocking the ball in.

The second goal did come for Celtic, a free kick just outside the box, inches from being a penalty, saw Dickinson thump his shot past Dorgan.

Cables got their goal after Ross Killock's push on his opposite number, Louis Coyne, during a free kick resulted in a penalty. It was a penalty and Jordan Wynne converted it.

The second half saw Celtic really kick on, dominating possession, patiently waiting for an opening. It eventually came after some almost chances, when Tom Brown threaded a ball through for Bailey-Jones to run onto. Finally there was no offside flag, and Bailey-Jones went one-on-one making no mistake slotting past the keeper.

The cushion was made comfortable when Bailey-Jones turned provider with an inch perfect cross to the back post where Jake Charles arrived and lobbed the Dorgan with a clever flick off the outside of his boot.

After making all their subs, Prescot's task got harder when Josef Faux had to limp from the field, looking to have pulled something. Celtic took full advantage when John Cofie picked the ball up in his own half, rode challenges, and a foul, dancing into the box and finally finishing with a classy finish that gave Dorgan no chance.

Both Charles and Cofie could have added a sixth, but Dorgan denied them both, the save against Cofie particularly impressive.

So Celtic extend their unbeaten run and now face a home tie against Rushall Olympic.