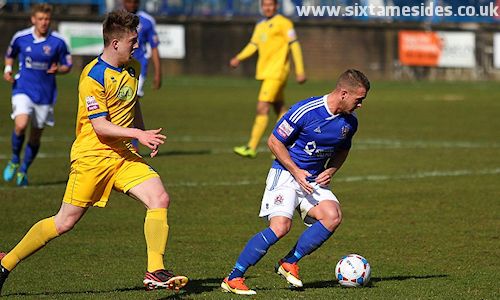 Stalybridge Celtic did their Conference North survival a world of good by taking the lead then coming from behind against a Gainsborough Trinity side that had hammered fellow relegation contenders Oxford 6-0 the week before.

Celtic always looked the most likely to score in the first half, Sean McConville latching onto a corner and smashing it towards goal only for Callum Howe to put his back in the way. McConville followed this up by latching onto a Josh Lacey mistake, and lobbing the keeper only for the ball to clear the bar by less than a foot.

The possession was turned into a lead when Liam Dickinson was put into the same position by a similar mistake from Lacey, missing a bouncing ball from Kelvin Bleau, and seeing Mike Emery advancing again, repeated McConville's lob, but with more accuracy coming in under the bar, and giving Celtic an early lead.

Joel Bembo-Leta looked to have doubled the lead as Gainsborough failed to clear a free kick, and Bembo-Leta latched onto Ryan Croasdale's blasted shot that hit a defender, fell to Bembo-Leta, he bundled it past Dominic Roma and over Emery. From somewhere the assistant figured somebody had to have been offside, and until the replay, most people will be disagreeing with him.

Liam Dickinson was next up to almost double the lead, when his low curling free kick smacked the upright, before it was Celtic's turn to fail to clear a free kick, Tom Davie heading at the far post into the ground, only for it to hit Matt Regan and into the back of the net, meaning Trinity were back in the game, without having a shot on target.

That gave Trinity impetus, and the game was more even after this, Curtis Bateson taking advantage of a mistake by Bembo-Leta, and forced a cracking save at the edge of his box by Danny East, to keep the scores level at the interval.

Celtic came out looking like they wanted it more, but Gainsborough got the best start when Jonathon Margretts collided with Matt Regan in the box, and coming off worse, but winning the penalty. Simon Russell who hasn't missed from the penalty spot all season stepped up and smashed the ball to Danny East's left.

Celtic were behind despite being the only team creating anything, summing up the season. But Celtic continued in the same vein, and Ennis's persistence paid off with a corner that caused Trinity a world of trouble, eventually falling to Matt Regan who culminated his peculiar hat-trick (scored at both ends and gave away a penalty) with a great goal, smashing his shot past Emery.

Celtic still looked the only team likely to score, and Jack Ryan's volley deserved to go in, as he latched onto a deep cross. Next up was Ryan Croasdale firing low and hard from twenty-five yards, only for Emery to get down well.

Celtic took the lead from the spot. With his back to goal, Liam Dickinson rolled around Roma, only for Roma to grapple Dickinson to the ground. Dickinson took the penalty kick himself, giving Emery no chance.

Paul Ennis nearly put Celtic two up with ten minutes left on the clock with a wicked curling shot from just inside the box after jinking past several defenders to get the space, but his shot snicked the outside of the post. Croasdale went close, but with five minutes left, Trinity came at Celtic, taking advantage of the injury to Kelvin Bleau that saw him leave the field, and Greg Young's header thumped against the top of the frame of the goal, which Andy McWilliams put out for a corner. Andy was next to leave the field, in injury time, despite Celtic having used all their substitutions. With Celtic running down the clock effectively in the corners, Celtic finished the game as they started, looking the most likely to score, when Obi Anorou found a yard of space and forced Emery into a save. Even so, the final whistle came as a blessed relief, as Celtic moved to within a point of Oxford, who lost, as did Histon, putting the pressure on the Oxford and Cambridge crews.