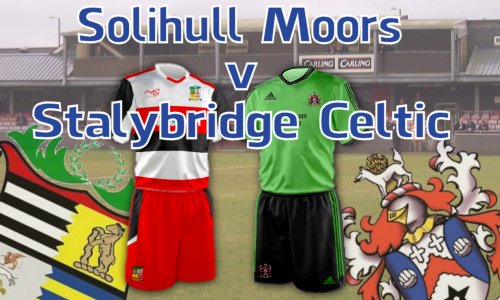 Weathering The Storm
By Debbie Taylor 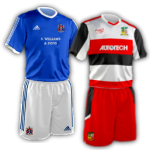 Celtic battled against a freezing fog and resilient, hard-working Solihull side to take all three points in a thrilling game at Damson Park who threw everybody at Celtic in the last half hour.

Celtic started like a confident team, attacking from the off despite the absence of wunderkind Dominic Calvert-Lewin, Charlie Ennis filling the dogged, pacey role well, and he could have had one within seconds of the game starting, but his low shot hit the side netting. Solihull showed why they were a top six side with quick, powerful passing that for long periods in the first half had Celtic chasing shadows. But they weren't creating that much, Ryan Beswick saw his twenty-yard effort stopped by Lewis King, whilst Omar Bogle and Junior English both fired embarrassingly high and wide.

When Celtic did get possession, they played well. James Cadman, playing an attacking midfield role, seemed to be everywhere, and twice got the space to let of a shot, but Tony Breedon was well placed to scoop up both times. Kevin Holsgrove was causing problems in the box with his strength, and saw a good penalty shout declined as he was disposed in the six yard box when it looked like he might score.

The half looked like it would end goalless, until Ennis raced through and drew Breedon, he went to knock the ball past Breedon, only for the keeper to come barrelling through Ennis to get to the ball. The goalkeeper protested that he had got the ball, and he did have a point, but after not giving the penalty on Holsgrove, this time it was awarded. Ennis himself stepped up, and smashed it with precision and confident power that gave Breedon no chance.

Celtic again started the half looking lively, with Ben McKenna skipping in past his marker and putting in a fantastic low cross to the near post that Robert Elvins missed, but Holsgrove didn't turning his shot between Breedon's legs to give Celtic a two goal cushion that they were going to most definitely need.

Just past the hour mark, Solihull began attacking in earnest. Omar Bogle saw his powerful header superbly tipped away by Lewis King with a strong one handed flying save, and Kelvin Bleau hacked it away, moments later and it was Darren Byfield cutting inside and unleashing a cracking effort that again had King flying to tip over for a corner.

A goal looked inevitable the amount of pressure Solihull were consistently applying. Cadman cleared a corner, but it came straight back into the mix, and though King saved extremely well close range from Bogle, there was nothing he could do as Darryl Knights came steaming in and smashed the ball into the back of the net.

Substitute, Stefan Moore, twice went close, and was denied first by Bleau on the line, heading clear and then by King who collected under pressure. It was bodies on the line to defend the goal, with Stefan Galinski almost constantly in action blocking and tackling to keep the Moors at bay, Matt Regan mopping up just ahead of the defence, and Matty Hughes bringing up the trio with a number of vital last ditch saves, including one sliding across the line to dispossess Moore.

When five minutes of stoppage time were announce, Solihull redoubled their efforts, and Bogle almost snatched the equaliser with a close range volley, but somehow King got down to it, and this was followed up by great defending in a massive goalmouth scramble that Celtic kept out. Solihull weren't helping their cause, and there was some very wayward shooting, seemingly working on the principle that one might go in.

But between the defence and Lewis King, the Moors were kept out long enough for the referee to take pity on the beleaguered defence and blow for full time allowing Celtic to put some space between them and the drop zone, and bring the next four teams into range.