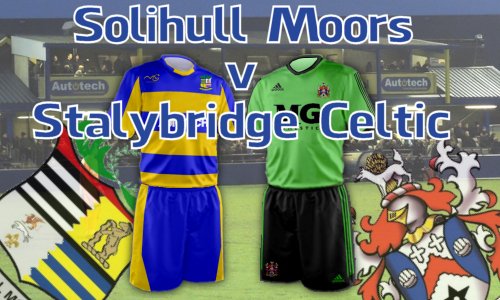 Moors On Top
By Mike Brierley 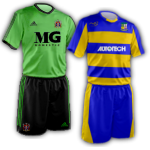 Stalybridge Celtic fell to a 1-4 away defeat at league leaders Solihull Moors, in a game they never really looked like getting anything form.

Although Solihull were worthy winners of the game and Celtic's lack of firepower were telling factors in the final result then the performance on the day was not as bad as the scoreline suggested.

Solihull took an early lead when Andy Brown headed home unmarked from a corner and from thereon in truth there was only ever going to be one winner.

The lead was doubled through a Steve Leslie screamer and the third came shortly after, with Liam Daly poking home after a scramble in the box.

It was Chris Simm, Bohan Dixon and Dale Wright that were at the heart of all things Celtic. The three between them breaking play up, bringing the ball forward and putting in a good shift with their workrate. Despite their best efforts however, chances were few and far between, if indeed any at all, meaning that the game was over as a contest by half time.

Celtic's consolation goal came after Bohan Dixon's rocket of a shot could only be parried by the Solihull keeper, who momentarily lost the flight of the bar, allowing it to drop behind team as Steve Tames rushed in to put the ball into an open net.

The best goal of the game though was surely the last. Michael Nottingham hitting an unstoppable shot past Tony McMillan to complete an easy win.

With Manager Liam Watson absent from the game, due to illness, the inclement weather and up against a side that have strong credentials to take the title on their home turf then maybe, it was always going to be a hard task to get anything from the game.

Although recent results have not gone the right way, there is still every chance of a good top half finish providing a run of results can be put together.