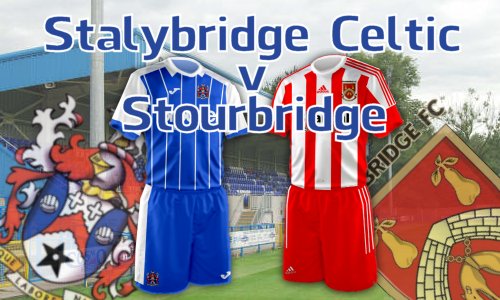 Celtic Win At Home To Stourbridge
By Debbie Taylor 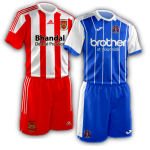 Celtic found their second league win with a scintillating second half display that Stourbridge had no answer to.

The first half was largely uneventful, but what chances there were came Celtic's way. Aidan Chippendale sending visiting keeper Matt Gould flying across his goal, though the shot sailed narrowly wide, whilst Gould did well to catch Tom Brown's effort from a free kick, and then did exceptionally well when Brown latched onto Theo Bailey=Jones's ball, and close range Gould blocked Brown's effort with his feet, the ball coming to Oli Roberts, but Gould was back in position to catch simply.

It was Tom Brown that began the process of the opening goal, Jack Duggan lunging at Brown as he bore down on goal, he missed bringing Brown down, but Gould managed to bring him down and conceding the penalty. Liam Dickinson stepped up and smashed an unstoppable penalty right before half time, though there was still time for Roberts to try and smash through a crowd, but the crowd was too dense.

The pedestrian first half was replaced by a fast paced, all action second half with chances at both ends. Bailey=Jones swept in from the wing and bulged the side netting from the wrong side, Jordan Archer should have done better, but Joe Slinn was well placed, the rebound put out for a corner, which Jack Duggam headed over. Sebastian Julien was proving a real handful for the visiting defence and it required a superb stop from Gould to deny Sebastian after a powerful run, which he repeated when Brown found some space.

With only a goal advantage, Celtic were vulnerable, a fact highlighted when Duggan headed a corner against the crossbar and Aaron Forde had the space for a shot at the edge of the box, but it was straight at Slinn.

A free kick at the edge of the box was Celtic's opportunity to double their lead, and Liam Dickionson didn't disappoint, curling his shot around the wall.

At the other end , Joe Slinn pulled off a superb stop to deny Leon Broadhurst's header, close range from a free kick.

Celtic were looking on top, despite the spell of pressure from the visitors. A killer third looked likely, and it came when Oli Roberts lashed in a diagonal effort that had Gould stretching to deny him with a flying one handed stop, the ball falling to Alex Honeyball pressuring Aaron Forde, between them, the ball crossed the line.

Celtic still need practice in closing the game down as Stourbridge managed to get a goal back. A free kick was dropped into the box, Matt Dodd's low shot was palmed away by Slinn to close to Leon Broadhurst who lifted the ball into the net, but it was nothing but a consolation for the visitors.