Bring on Chesterfield!
By Debbie Taylor 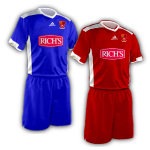 The Terriers earned their name, as they nipped at the ankles of Celtic at every opportunity, denying the Bower outfit any chance at settling into their usual confident passing game style. Bedlington forced Celtic into tactics that they had not employed since being in the Unibond, with quick passing and committed tackling.

Celtic made the early running, with Peacock and Bushell forced into moving the ball quickly as they were closed down by the fired up Terriers.

After a corner had been punched clear by Burke in the Bedlington nets, he climbed up the back of his own defender Teasdale. Teasdale remained on his feet for a few moments before lying down, on the six yard box, playing onside the entire Celtic team. Bushell, who received the punched ball drove down the right hand side of the field, taking on and beating every Terrier in his path, before reaching the edge of the box, and sliding the ball square to Clements. The on-loan striker was onside thanks to Teasdale, and it was the most simple of finishes when he side footed it into the net past the despairing Burke.

Burke's clearance ability was certainly in doubt, as Celtic pressed for a quick doubling of the tally, with Peacock making space at the side line before whipping in a cross. Burke's half hearted clearance fell to Pickford twenty five yards out, and he picked his spot carefully to the top corner furthest from Burke. The Bedlington keeper performed miracles to scramble across the face of his goal, and leap for the incoming ball, palming it around the post at the very last moment.

Though Celtic wasted the corner, they were soon at the Terriers again. This time Clements used his pace to close down a hesitant Bogie, and race towards the net. With his hurdling pedigree, the Cambridge man leapt two challenges, making some space for himself, and shot low and hard, which Burke stopped well, gathering on the second attempt.

The visiting keeper would again prove his worth, after Courtney provided the perfect ball into the box for Clements to chase. With his devastating pace, it was touch and go as to whether Burke would make it, though he did - just, collecting off Clements' feet.

Bedlington slowly began to edge back into the game, mainly down to their intensive midfield battling, and Bogie should have equalised when Cockburn found Milner at the edge of the box. The top scoring striker brought the ball down into an ideal place for Bogie to lash at - but the defender saw his effort clear the net by a good Ben Futcher height!

Futcher was well placed in the heart of the defence, linking up with Woods and Beesley to deny any easy access to goal, and he performed several outstanding tackles, and cleared a dozen dangerous crosses. And when Scott acted as winger, which he did frequently, leaving his area of defence wide open for a Bedlington attack, Futcher was on hand to cover the missing defender, closing down any attacks, though this left Celtic exposed to high balls in the box. However, even Futcher was beaten when Cross laid off Chapman to break open the Celtic back line. Chapman took an extra touch to evade Fish though the Celtic keeper dived bravely at his feet, but as the tight angled shot came in, Matt Woods hoofed it clear off the line.

Neither keeper was unduly worried for the rest of the half, as the game degenerated into a titanic midfield struggle, with Bedlington slowly gaining ground.

At half time, Futcher must have pressed onto his lads the importance of regaining the imitative in the second half, and this they did, immediately pressing Bedlington back into their third. Courtney looked set to score when Peacock's inch perfect corner found him unmarked at the edge of the six yard box, but the ex-Marine striker sent his header narrowly wide.

Celtic got the breathing space they needed as Bedlington again struggled to clear their lines under intense Celtic pressure. He got a second chance to make amends, when Bushell found him, but this time, though he beat Burke, Teasdale could head it out.

Celtic got the breathing space their pressure had earned, when a Bushell ball into the box was half-cleared by Cross, sending the ball into the air. Pickford was waiting at the edge of the 'D' on the penalty box. He watched it fall and lashed his volley net bound. Burke dived his and right, managing to get a hand to the fierce drive, but it went in under the bar anyway.

Celtic were jubilant, and a momentary lack of concentration allowed Chapman to steam towards the Celtic box. A fine piece of skill allowed him to elude Beesley, putting a lobbed ball into Milner's path. Milner's header lacked any real power, and Fish was in exactly the right place to gather the ball up.

With Burke's goal-kicks evidently suspect, he relinquished that duty to Teasdale, who, it has to be said, performed little better. With a Celtic head invariably being the target.

Bushell and Peacock continued to make fools out of the visiting defence, and Bushell had a golden opportunity to put the game well out of the reach of the visitors, when he raced onto his own through ball and brought the ball into the area. McNeil (on for Clements), Peacock and Courtney were all lined up on the six yard line, with nary a defender between them, but Bushell elected to go for glory, and miss-hit his shot around the post and into the side netting.

Milner again got a chance to halve the deficit when Harminson raced onto a Graham ball into the corner, and whipped a cross in. It somehow evaded the head of Futcher, but Milner fortunately headed over the bar.

McNeil showed some of the tenacity from last season when he robbed Bedlington in the middle of the park, and went in on the goal keeper. Eager to make up for a series of mistakes, Burke somehow produced a classic save to deny McNeil an FA Cup goal. He again proved his point, stopping and smothering Pickford's fierce corner of the box drive after the midfielder received Parr's knock down. Peacock too went close after making space outside the box, but Burke made that catch look easy.

McNeil almost destroyed any chance Bedlington had, after an inch perfect fifty yard cross from Peacock found Futcher, still up field after a corner. The tall defender directed it right to McNeil's head, but somehow, McNeil headed wide of the post, taking most of the paint off as the ball scraped past.

Gibb, on for Cross to add more bite up front, was lucky to stay on the pitch after hacking down Murphy several seconds after the ball had gone. Though the assistant was a mere foot away, and indicated the severity to the referee, the referee merely talked to Gibb. That would not be the case moments later when he came back to defend a corner, and stayed back long enough to lunge into McNeil as Celtic brought the half cleared ball away. With the Celtic man not even having the ball, and the referee having a clear sight of the incident, Birkett produced the only card of the game to send Gibb fuming off the pitch. A real attacker's challenge, and one worthy of the card. Nobody on the Bedlington team complained.

With five minutes remaining, and down to just 10 men, many of the Bedlington fans gave up the ghost and started heading out of the ground. Which was a shame, as the team themselves never gave up.

Bedlington, though a man down, looked a man up, all of a sudden. Obviously they had heard of the Celtic Cursed Corner flag, and started pressing attacks in the dying moments of the game.

First Scott granted them a corner, then Futcher, as Celtic struggled to clear their lines. Though Fish was expertly catching anything that came close, the home crowd knew what was coming.

The ball fell to Chapman at the edge of the box, and his half-volley was brilliantly tipped over the bar by Fish, but that gave Bedlington a corner, with seconds on the clock. As though looking for an equaliser, the whole Bedlington team apart from Burke, piled into the Celtic half.

Perhaps the presence of so many red shirts gave Celtic problems marking, but Milner rose highest for Chapman's corner and planted it past Fish.

Milner did not stop to celebrate, he grabbed the ball and ran up field and dropped it onto the Centre circle. The Terriers sensed his urgency, and were back into their own half before Celtic could recover their positions.

But it was to no avail, as Bedlington swept the ball out to the wing from the kick off, the referee blew for full time, and Celtic could looked forward to a juicy home tie with Chesterfield.

The second division outfit are struggling in the league at present, and know all about the position that Celtic are in.

Futcher himself was pleased with the result, but admitted that he was more focused on gaining points in the league.

"The FA Cup is not an issue just now." he told the Nationwide site, "We are facing a trip to Doncaster at the weekend. They are full-time and have spent a lot of money because they want to get into the third division and it is going to be a tough game."

Most Celtic fans would agree.