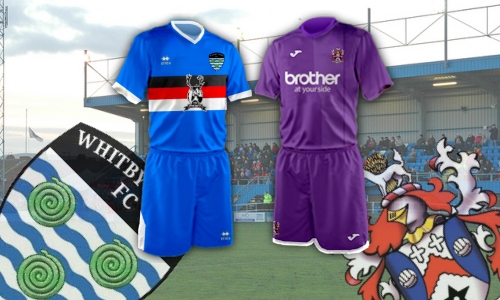 Celtic Lose Away At Whitby
By Deborah Taylor 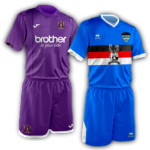 A missed penalty and a bizarre ruled off goal meant Celtic succumbed to their fourth consecutive loss.

Whitby took early advantage of Celtic still being on the bus, sending a long hopeful ball down field that caught in the wind, preventing it from leaving the ground. Junior Mondal out-paced the Celtic defence to reach it, going one-on-one with James Aspinall, slotting the ball past him to open the scoring within a minute.

Celtic started to wake up, Chris Sharp working industriously at the spearhead of Celtic's attacks. With Luke Wall and Matty Wolfenden backing him up Celtic were starting to see the game move closer to the Whitby box. A clever diagonal ball from Glenn Rule opened up the Whitby defence allowing Sharp to pick up the ball. Wall and Wolfenden were waiting for the pass as Sharp entered the box, only to be clipped by an unapologetic Andrew Monkhouse. Steve Irwin stepped up to take the penalty, and perhaps should have left it for Sharp as his spot kick blazed over the bar.

Sharp turned provider moments later, when he lifted a rapidly dropping cross in from the side lines for Ross Dent. Outnumbered at the edge of the box, Dent's twisting flying header was top notch, looping the ball over the outstretched fingers of Adam McHugh for the equaliser.

After both Wall's edge of the box shot was comfortably stopped and Sharp's angled drive was wide, Whitby tried to replicate their opening goal, lofting the ball downfield for Mondal to use his pace. It was an effective tactic, putting Mondal twice into a one-on-one with Aspinall. Both times, Aspinall came out on top, standing up well and palming the low shot out for a corner for the first attempt, but on the second Mondal peeled away and collected the ball. The Celtic defence were back with Liam Tongue and Scott Wilson both back to help Aspinall at the near post, but somehow, Mondal's low acute angled drive went through them all and into the back of the net.

Celtic should have been on level terms again as they pressed the home side mercilessly. Irwin's free kick was met by Michael Clarke, putting his header agonisingly wide of the mark at the back post, before the strangest offside decision of the season. A free kick out wide, whipped in, Danny Brady behind ball and players reached the cross to divert it into the top corner. Textbook? Offside.

Celtic continued to try and find ways through the home defence. Wall's low cross was meant for Sharp, with Monkhouse cutting out the cross, only for the ball to fly narrowly past his own post. With Whitby struggling to get the ball clear, a second corner eventually fell to Wall at the edge of the box, but his effort was always rising. Irwin lifted the ball over the defence for Sharp, who held off Monkhouse and White to get to the six-yard box. He lifted the ball over McHugh as he came sliding in, but somehow, the Whitby keeper twisted to get a hand to the ball and allow Alex White to hack it clear.

The second half continued to see Celtic create chance after chance, but fail to put any away. Right from the off, Brady's header from a corner was inches wide, whilst Clarke headed past the opposite post from a foul out wide. A Scott Bakkor cross was just over the bar from Sharp and Neil Kengni's low drive was blocked on its way to the bottom corner by Josh Nearney sliding in to protect the open goal. Even in stoppage time, Celtic looked for a way, but both Clarke and Kengni were off target after some good build up play.

Celtic had the lion's share of the chances, Whitby took two of their three, Celtic took one of their dozen, dubious offside decision aside, more accuracy in front of goal is required.