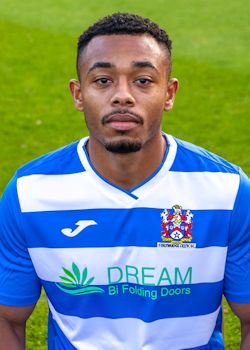 Wolverhampton born, Kallum, started his career at Oldham Athletic, coming through the youth ranks and breaking into the first team in 2016, going on to make 3 appearances. He debuted against Wigan Athletic in an EFL Cup match before being loaned to Alfreton Town. Kallum went on to make 27 appearances for the club. At the start of the 2018/19 season, Kallum joined Altrincham, making 5 appearances for the Robins, he left them to join Ashton United, where he made a further fifteen appearances and scored three. He finished the 18/19 season with Curzon Ashton and joined Celtic in August 2019. He made 37 appearances, being a near ever present player for Simon Haworth even being played out of position. He re-signed with Celtic ahead of the 2020/21 season.
Sponsor
Aaron McMullen
Career
Position
Midfielder
Born
1st May 1998 (23 years)
Joined
9th Aug 2019
Last App
3rd Nov 2020
Last Goal
20th Aug 2019
Season
Career
Appearances
9
46
As Sub
0
2
Subbed off
0
3
Unused sub
1
5
Goals
0
1
Hattricks
0
0
Assists
1
1
Red Cards
0
0
Yellow Cards
1
1
Points
9 / 27
57 / 138
Average Points
1.00
1.24
Wins
2
16
Draws
3
9
Losses
4
21
Total Pitch Time
661 mins
3905 mins
Appearances
Sponsors
Main club sponsor