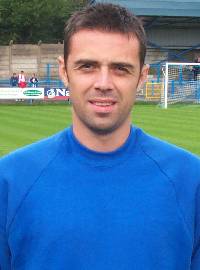 Richard started his career with Sheffield United (he was born in Sheffield) as a trainee, before being signed to Hull City in October 1993. He made 200 appearances for Hull as an attacking midfielder, before being spotted by Lincoln City. Lincoln wanted Rich so badly they exchanged two players for him. With his pace and ability to run around defenders without losing the ball, he looked set to make an important contribution for the Imps, but during his two year stint in the second division but was beset by injury and made only sporadic appearances hereafter. Chester offered him full time football, and after much deliberation, Richard joined the other Blue and Whites in Cheshire.
Career
Position
Defender
Born
29th Oct 1972 (48 years)
Joined
18th Aug 2001
Left
22nd Mar 2002
Last App
16th Mar 2002
Last Goal
23rd Feb 2002
Career
Appearances
38
As Sub
1
Subbed off
7
Goals
7
Assists
0
Red Cards
0
Yellow Cards
0
Points
45 / 114
Average Points
1.18
Wins
12
Draws
9
Losses
17
Total Pitch Time
3165 mins
Appearances
Sponsors
Main club sponsor