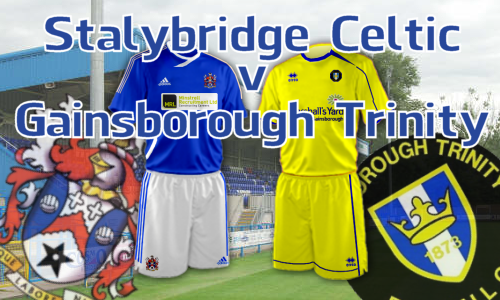 Celtic face last season's play off team, Gainsborough Trinity at Bower Fold tonight (kick off 7:45pm). Like Celtic, Gainsborough started this season off with a loss, although their loss was at home, whilst Celtic's was away at Workington. There will be a match centre for this game.

Last season, Gainsborough finished one place, and three points above Celtic in fifth, taking the last play-off spot on the last day of the season. They ultimately lost out in the play off lottery, but are looking to build on that.

Their last visit to Bower Fold was in August last season, when they were handed a 4-0 drubbing and saw Brian Little sacked as manager. Their new boss took them from strength to strength, and they almost made their first promotion ever, beating us in Gainsborough 3-1 at the start of December.

Last season, Ryan Kendal was Gainsborough's top scorer with fourteen goals, Leon Mettam pushing him all the way but finishing on ten. They scored an average of 1.7 goals a game, conceded 1.4 (away from home, 1.6 and 1.7 respectively), and finished the season having scored seventy four goals (thirty-six away from home) and conceding sixty-two (thirty-eight away). This left them well down the goal scorer's charts.

Celtic will be without Andy Ralph who broke his leg three minutes into his debut. Alex Cairnes, an onloan goalkeeper from Leeds United, who has made one first team appearance, should be making his debut in his place. Kristian Platt was ill, but played, for the Workington Match. In that match, that finished 4-1 in Workington's favour, Celtic lined up as:
1. Andy Ralph
2. Kelvin Bleau
3. Mark Lees
4. Kristian Platt
5. Joel Bembo-Leta
6. Jordan Barrow
7. Jamie Mullan
8. Greg Wilkinson
9. Jack Laird
10. Corey Gregory
11. Mitchell Austin

Celtic really need to kick their season off, and hopefully can do it tonight in front of a home crowd.