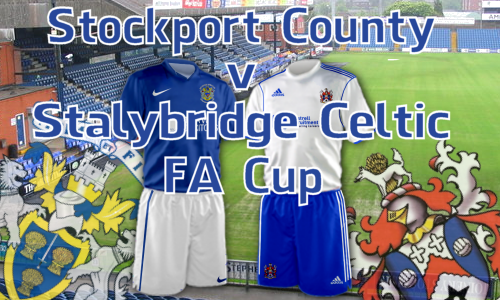 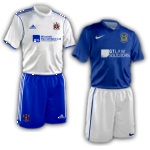 On Saturday, the road to Wembly has a stop at Edgely Park for Celtic when we travel around the M60 for our clash with Stockport County (kick off 3pm). Stockport are currently mid-table in the Conference National, having won five of their opening fifteen games. Both teams are looking to go into the first round proper.

Stockport sit in eleventh in the Conference Premier, making Celtic the minnows in this meeting. The gap between the two sides in the last meeting was bigger than this time around, but Stockport are playing much better having only lost once in their last six games, at home to Wrexham. They have seen off Kidderminster in their last match, beating them at Edgely Park 1-0. They have had two draws also in those last six matches, being held away from home 0-0 by Braintree and 1-1 by Southport. They lost 4-3 to Wrexham, having started badly with former Celt's, Craig Hobson's own goal.

The last meeting between the two clubs was in the FA Trophy last year, with two goals from Connor Jennings firing Celtic into a replay that was won by a sensational Greg Wilkinson strike and a last gasp goal from Connor Jennings firing Celtic through to the next round. Prior to that, Celtic and County have met in the Cheshire Senior Cup Final, which Celtic won 5-1, and in a friendly that Celtic won 7-3, meaning that County have never beaten Celtic, despite always being in a higher division. Which bodes well for the match on Saturday.

County may well be without Danny O'Donnell after he suffered a gashed eye in the Manchester Senior Cup game against Bury. Also missing will be loan player Tom Eckersley, who has not been given permission to play. Stockport do not have any suspension worries. In their last league match, the 1-0 win over Kidderminster Harriers, they lined up as:
1. Ian Ormson
2. Andy Halls
3. Sean Newton
4. James Tunnicliffe
5. Danny Whitehead
6. Danny Hattersley
7. Tom Collins
8. Craig Hobson
9. Jordan Fagbola
10. Matty Mainwaring
11. Paul Turnbull.

Celtic will be checking on the fitness of several players, but hopefully there will be a fully fit squad to choose from. In Celtic's last match, the 2-1 away win over Worcester City, Celtic lined up as:
1. Alex Cairnes
2. Joel Bembo-Leta
3. Mark Lees
4. Kristian Platt
5. Sam Egerton
6. Callum Warburton
7. Jordan Barrow
8. Greg Wilkinson
9. Dennis Sheriff
10. Jamie Mullan
11. Mitchell Austin

The draw for the First Round Proper is on ITV on Sunday at 1:30pm. Celtic or Stockport will be ball number 62.