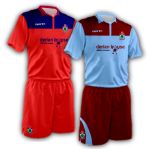 Despite long periods of possession and pressure by Celtic on the visitors, Celtic were up against it from the off, always chasing the game, and looked destined not to score if the game had continued to its original scheduled date of Tuesday night, losing a glorious chance to go top of the league.

Colwyn Bay scored in their first and only attack of the half, in the first thirty seconds. A comedy of errors on the goal line resulting in Mike Lea somehow squeezing the ball over the line past Kristian Platt and Jan Budtz from a foot out after Robert Hopley's initial cross/shot at one post was half blocked by a slipping Rhys Meynell bobbling across to Lea.

Celtic moved the ball quickly looking for a rapid response, Steve Brogan warming Chris Senna's hands after Connor Jennings had found enough space in the box to pull it back to Brogan. Moments later and it was a cleverly lofted ball from Lloyd Ellams to Phil Marsh, who slipped but still managed to push it to Wilkinson on the edge of the box for the Celtic man to fire over the bar. A fantastic ball across the face of goal came to Brogan steaming in at the back post but his smash went flying back across the face and just wide at the other side. Brogan got even closer midway through the half, lifting the ball over Senna, only for Danny Meadowcroft to get back and put enough of his head on the ball to divert the goal-bound effort onto the crossbar. Celtic kept coming, and Rea's effort through a Colwyn Bay box containing all except one Colwyn Bay player just needed a slight defelction, but managed to evade everybody and skim just wide.

Senna showed his class with an outstanding save from a Greg Wilkinson swerving dipping effort from the edge of the box, flying across the face of his goal to palm it out for a corner that Chris Lynch headed narrowly wide. Just before the end of the half, Brogan took a free kick that whistled just past the post.

The second half was a similar procession towards the Colwyn Bay goal, within a minute it looked like Celtic might equalise. Jennings cleverly curling the ball over Senna towards the top corner, but from somewhere, somehow Luke Denson found the spring to get across and head the ball over the bar from within millimetres of it crossing the line. It was constant pressure from Celtic, and Senna had to earn his man of the match award again with a close range Phil Marsh effort that looked destined to bat the Seagull's keeper but enough of a fingertip palmed it away. The clearance off the shot from Luke Denson fell to Domaine Rouse, who looked yards offside, but the assistant kept his flag down and Rouse was one-on-one in acres of space, but Budtz was more than equal to the task, saving quite comfortably in the end.

The Colwyn Bay box was packed for much of the half, with last ditch tackles preserving a slender one-goal lead. Corner after corner came, with Celtic still unable to find the one that would get the ball over the line. Both Jennings and Wilkinson went agonisingly close until in the last five minutes, the task went from difficult to impossible.

With the Celtic backline stood on the half way line, a long ball fell to Danny Lloyd alone and a good fifteen yards inside the Celtic half. Inexplicably, the flag stayed down and it was a race by the Celtic players to catch Lloyd, which amazingly they did. Lloyd still managed to fire a cross into the box ? despite a lack of Colwyn Bay players to aim at, the ball striking Greg Wilkinson's hand, which was down by his side. That was seen by the assistant, and he flagged for a penalty.

Lee Davey took the spot kick and secured the points for the home side.

Celtic weren't going to go unbeaten all season, and the aim of football is to score more goals than your opposition; something Celtic couldn't do against Colwyn Bay.