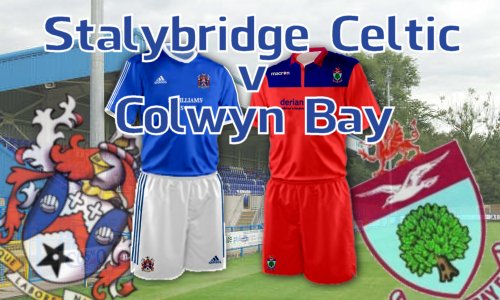 A combination of goal-line clearances, the woodwork and two lapses in defensive judgement allowed Colwyn Bay to be two up at the break, and the resolutely held on to leave Celtic looking at another pointless afternoon.

Within the opening ten minutes, it looked like Celtic might break their Lockwood and Greenwood duck when Colwyn Bay just couldn't clear a corner. It eventually fell to Anthony Malbon, having his best game in a Celtic shirt so far, but Anthony Stephens got his head in the way to deflect the ball onto the bar and out, to where debutant loanee, Todd Jordan received it and tried to prod home, only for Chris Noone to somehow block. Colwyn Bay couldn't clear, but Celtic couldn't score.

As if to show Celtic how it was done, a few minutes later, and Celtic failed to clear Wes Baynes's cross, which caused mayhem in the Celtic box, but a half cleared ball came to Rob Hopley and he fired home in the way that Celtic had been unable to do moments before.

Five minutes and Colwyn Bay got the cushion they would need, when a simple corner routine saw the ball sail over everybody's heads to be met by Anthony Stephens arriving late to head home unchallenged.

He nearly doubled his tally in exactly the same way moments later, but this time Lewis King made the save look easy.

Celtic had to get back into the game, and they did start to look more cohesive as the half reached the midway point. The long punts from defence were reduced, and Anthony Malbon started pulling the strings up front. His lay off to Aidan Chippendale straight into his long curling path was inch perfect allowing Chippendale to his the curling shot first time, around Josh Ollerenshaw only for Louis Moss to somehow get back to the line and head away an inch from crossing the line.

The second half saw the Seagulls trying to hold onto what they had, and they rarely ventured forwards; though former Celtic frontman, Obi Anorou twice went close, once prodding a straightforward attempt into Lewis King's midriff before missing an open goal, when he latched onto Rob Hopley's cross with the Celtic defence trailing in his wake, but put the ball wide of the mark.

He wasn't the only one to miss an open goal, Ben McKenna was always leaning back as he tried to volley Aidan Chippendale's cross into the back of the gaping net, sending his effort high over the bar from close range. Charlie Ennis chose to shoot instead of the lay off to Malbon, and forced a top draw save from Ollerenshaw, at full stretch to keep Ennis out.

A goal did look likely from Celtic, and it came with twelve minutes still on the clock. It initially looked like Malbon had fluffed the chance of side footing in Kevin Holsgrove's cross, but did get enough of a touch to allow Ben McKenna to retrieve the loose ball and loft it back in. Malbon's first attack of the ball was blocked by Noone, but when it fell, Malbon lashed out and connected well, leaving Ollerenshaw no chance, and giving Celtic a glimmer of hope.

Keith Briggs lashed in a twenty-five yarder that had Ollerenshaw at full stretch again, gathering in quickly, and the Seagull's keeper did really well when McKenna got half a yard to keep Colwyn Bay ahead. As the minutes ticked down, Celtic were hammering the Colwyn Bay box, but the final touch just wasn't there. To make matters worse, after being lashed out at by Rob Hopley, Keith Briggs reacted badly, and received a caution, as did Hopley, but this was compounded when Briggs was harshly adjudged to have fouled Wes Baynes, who looked to have disposed fairly, but the ref disagreed and dismissed Briggs.

Even so, George Lomax twice managed to head narrowly wide from Holsgrove and McKenna crosses, whilst Malbon could have snatched a much deserved equaliser in the dying seconds from another fine Holsgrove cross, and Holsgrove himself could have been the hero of the hour when he headed Malbon's lifted ball agonizingly wide of the far post.

Celtic didn't deserve to lose this one.