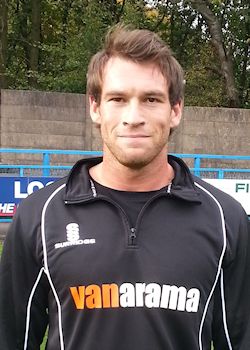 Kevin is an attacking winger with a great reputation in non-league football. He started his career with Everton youth, before joining Cefn Druids in 2007. After a couple of seasons with a Welsh team in the Welsh league, he joined Colwyn Bay for the first of his two stints. There was a move into England after just a month with the Seagulls, joining Hyde United. In 2010 he moved round the M60 to Altrincham, and was loaned twice back to Hyde, before his release to Boston United at the start of teh 11/12 season. The travel was too much at Boston, and Kevin moved closer to home to play for Halifax Town, for a couple of months before moving even close to home to play for Vauxhall Motors. After a good season at Vauxhall, Kevin rejoined Colwyn Bay, but couldn't settle there, and went to play for Guiseley, managing to play twice against Celtic in the space of a month (and got sent off in both!). At the start of the 13/14 season, it was back for his second stint at Halifax, but only stayed at the shay for a short time before being loaned back to Guiseley until the end of the season. He started the 14/15 season at Halifax, but with first team football at a premium, he has joined Celtic.
Career
Position
Midfielder
Born
19th Jan 1988 (33 years)
Joined
15th Oct 2014
Left
9th Mar 2015
Last App
7th Mar 2015
Last Goal
4th Jan 2015
Career
Appearances
19
As Sub
6
Subbed off
6
Goals
3
Assists
3
Red Cards
1
Yellow Cards
3
Points
19 / 57
Average Points
1.00
Wins
5
Draws
4
Losses
10
Total Pitch Time
1252 mins
Appearances
Sponsors
Main club sponsor