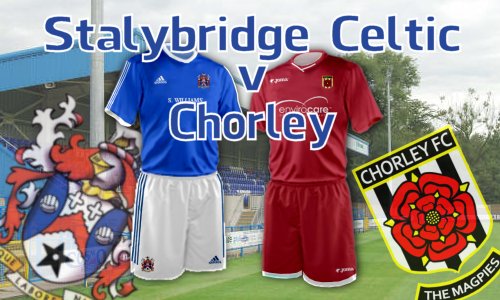 Out Of The Trophy
By Debbie Taylor 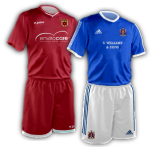 After Saturday's heroics, Celtic exited the Trophy but in the process broke the hoodoo on the Lockwood and Greenwood end.

Charlie Ennis started like a house on fire for Celtic, and had the best chance early on, lashing a shot that had Sam Ashton beat, but Kyle Jacobs got in the way, the ball coming back to Ennis, but this time, Ashton was better placed and made the stop.

That spurned chance was made more meaningful when Nathan Heath missed a clearance, and the ball ran through to Jack Lynch who drilled a low shot past Lewis King. It could have been two moments later when Lynch got another chance, but his shot from distance was gathered at the second attempt by King.

Chorley looked content to see out the half without moving up the gears, holding Celtic at bay far too easily and almost added one just before the interval when Mark Ross headed a corner well wide.

Charlie Ennis and Kevin Holsgrove both had chances, Ennis lifting a free kick over the wall and into Ashton's arms, whilst Holsgrove scuffed wide. At the other end Dan Whitman and Paul Jarvis had shots by name, if not particularly difficult to deal with. However, Josh Hine's driven low cross into the box was met by the sliding boots of both Nathan Heath and James Dean, with James Dean claiming the deciding touch.

From one possible own goal, to another, but one that is the first Celtic have scored at the Mottram end of the ground. Kevin Holsgrove made some space and fired in a shot towards one post that had Ashton going that way, until a ninety degree deflection from Mark Ross saw Ashton wrong footed and injured trying to get back across, the ball crossing the line before he could get there, and providing the score-line with more flattering final outcome.