Straight in at number 1!
By Keith Trugeon 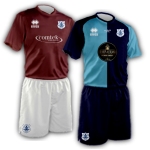 Super Celtic continued their unbeaten start to the season and shot to the top of the table in the process - at last giving their supporters something to shout about.

Celtic were lacklustre in the opening period, just as they were against Droylsden, but they put on a stirring second half show which could have brought more goals than the ones which secured their fourth victory in six games.

In actual fact, Celtic were lucky to go in at half-time on level terms. Only a tremendous double save by Gary Ingham prevented them falling behind on 12 minutes and he was again the hero 3 minutes later, hurling himself to his left to turn David Bayles's 30-yard free kick around a post.

Bridge were unlucky not not to be awarded a penalty in the 20th minute when Steve Jones appeared to be tripped by Bayles as he shaped up to shoot. And other than long range efforts from Tony Sullivan and Dominic Crookes, Celtic never really threatened the visitors' goal.

In the second half, Bridge were quickly on the offensive with captain Bauress firing just wide from 25 yards. And on 52 minutes Celtic snatched the lead when a Bauress corner was slammed home by the in-form Matthew McNeil from inside the six-yard box.

Celtic were visibly lifted by the goal and Bauress finally put the game out of the visitors' reach 12 minutes from time when he crashed home a stinging angled drive, leaving Celtic sitting pretty at the top of a division for the first time since they were crowned champions of the HFS Loans League Premier Division back in 1992 to gain promotion to the Conference.