Next stop, the season
By Iain Benson 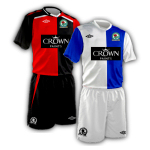 Celtic played some very nice football against a powerful Blackburn side, with some neat interchanged passing, but couldn't find the back of the net. Nathan Joynes could have opened the scoring as he took Steve Torpey's lobbed pass well on his chest, but Jason Brown was out quickly, and Joynes's attempted lob cleared the bar.

Dean Winnard was called to clear off the line as Chris Williams nodded back a corner, midway through the first half, for Paul Sykes to stab home, with Brown beaten, Winnard had to make the block.

Celtic lost the services of Barrie Keeling early on, and Blackburn took immediate advantage of the reorganising defence, with Maceo Rigards outpacing Sykes, but striking the side netting, and minutes later, when Celtic failed to push out from a corner, he was on hand to blast through a crowd, Phillips seeing the shot late, and unable to reach it.

Matty Barlow could have equalise don the stroke of half time, when he curled a shot towards the bottom corner, but it whistled narrowly wide.

The second half saw Celtic open well, with Brown fluffing a catch from a corner, with Griffiths saving his blushes taking the ball off Barlow's toe, and it took a decent stop from Brown to deny Williams.

Blackburn's answer was a ball over the top, and Rigards pace getting him one on one with Phillips, he rounded the Celtic keeper, and slotted home. Phillips then failed to take a corner cleanly,and Tom Denton made it three for the visitors with a tap in.

A great save from Brown denied Joynes's powerful strike, the parry falling to Williams who should have scored, but hit the bar from six yards out, and Blackburn could have made it four when Denton forced Phillips into a brave save at his feet, before Marcus Marshall did make it four with another pacey run, beating Phillips with a late low shot.

Some of the football on show was pleasing, but the loss of Keeling and Torpey in the first half is a worry ahead of the season on Saturday.