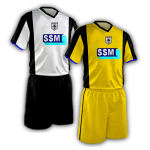 New Mills put in a lot of graft to grind out victory on a muggy evening in front of a decent sized crowd. Both sides sized each other up, with most of the early action around the New Mills final third. From a corner, Lee Ellington was unlucky not to open the scoring with a flicked header that saw an instinctive save from Barry George, whilst at the other end, a turn and shot from Garry Kharas forced an excellent save from Paul Phillips.

It was the home side who took the lead when a corner wasn't cleared, and the ball was fed low across the six yard box after Phillips had made an initial near post block; Kharas, unmarked at the back post, tapped home against his former club.

Celtic kept the urgency low as they played out the first half, and forced George into two more excellent saves, one from Paul Sykes, after a half cleared corner fell to him at the edge of the box, and a second, just before the interval from Keith Briggs, skimming the ball across the goal from distance that George did well to reach.

The second period saw the usual litany of changes, and some neat passing from both sides, until Alan Mather took advantage of sleepy defending as Celtic struggled to clear the ball, bundling the ball past Phillips on the goal line.

As the game went into the final third, Celtic did up the ante, and created numerous chances, with Ellington, Torpey and Briggs all going close, before Nicky Platt unleashed a screamer of a shot from thirty yards that smashed into the stop corner with George able to watch it fly in.

Platt nearly equalised with a similar effort near the end, but New Mills held on for a hard worked victory.