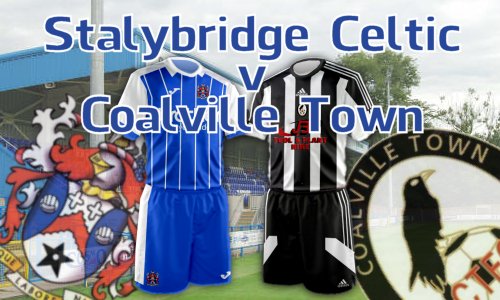 Celtic Lose At Home To Coalville
By Deborah Taylor 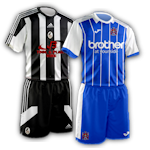 The fortnight from Fixture Hell continued on a warm sunny afternoon at Bower Fold, with Coalville Town the visitors, in their last away match of the season they didn’t have much in the way of opposition, with Celtic visibly tired.

Harrison Holgate had the first effort of the afternoon, cutting inside and firing low, but Elliott Taylor was untroubled. Coalville were exploiting the tiredness of the home team and getting chances, Nathan Watson unmarked at the back post with a tap in, somehow contriving to miss, whilst Kyle Dixon at the front post, after rounding George Sykes-Kenworthy also managed to miss the target.

The opening goal came twenty minutes in from a simple set-piece, Steve Towers able to cushion his header into the back of the net from a corner.

Celtic tried, with Baulio Maieco’s powerfully struck effort deflected for a corner with Taylor beaten and Matty Wolfenden’s reverse diagonal shot lacking the power to get past Taylor who got across well.

The second half was more of the same. Jake Charles almost added to his season tally, but saw his low shot scooped up by Taylor, and on the hour, Coalville killed the game off with a pull back from the by-line from Nathan Watson for the unmarked Clleveland Taylor curling in from the wing, striking the ball at the corner of the box low and in at the far post.

Charles forced Taylor into a cracking one-handed save, looping Danny Morton’s cross back across goal for the far post, but the Coalville keeper did well to palm it away for a corner. Sykes-Kenworthy pulled off a similarly spectacular save at the other end, when Kyle Dixon’s rising shot looked destined for the top corner. With twenty minutes left on the clock, both Wolfenden and Elisene Fernandes went close, Wolfenden’s header not powerful enough to trouble Taylor, and Fernandes’s shot dragged too far wide.

Coalville added to their tally, after a corner, Towers again steaming in, but this time with Sykes-Kenworthy in position to deny the Coalville scorer, until Jake Woolley’s stuck out foot diverted it past the young keeper.

The game had an end of season feel, and it almost is for Coalville, but in the remaining week, Celtic still have another four games to play! Added to the woes, Jack Taylor pulled a hamstring in the pre-match warm up and will likely miss the end of the season.