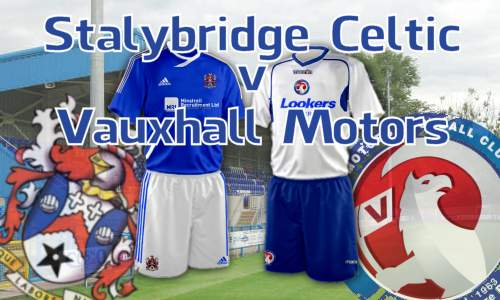 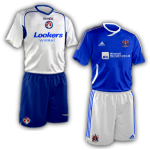 On Saturday, Celtic host Vauxhall Motors (kick off 3pm). Vauxhall are currently seventeenth in the league table with sixteen points, five points and seven places behind tenth placed Celtic, despite having played a game more. There will be a match centre for this game.

Vauxhall have lost six of their last seven games, scoring five and conceding twenty-one goals. Their last win away from home was on the opening day of the season, when they beat Corby 1-0. Since then, they've picked up just one point on the road, a 2-2 draw with Bishop's Stortford. Their last three away games were all in Yorkshire, losing 2-1 at Guiseley, 4-0 at Halifax and (most recently) 3-1 at Harrogate.

Vauxhall's last win at Bower Fold was August 2010, when they won 4-1 in the league. Their last win over Celtic was at the end of last season, at Rivacre Park when they won 1-0. Celtic's last win over Vauxhall was this season, when we knocked them out of the FA Cup with a 1-0 win at Bower Fold. Our last win in the league was at Bower Fold, in August 2011, when we beat them 4-2. Vauxhall have won just four times, and drawn twice in their last thirteen visits since the turn of the millennium. Incidentally, the same number of wins Celtic have had at Rivacre park over the same period, although we've managed twice as many draws.

Vauxhall's top scorer this season is between Dan Parkinson and Tom Rutter, both of whom have four goals. Motors have scored eighteen goals at a rate of 1.1 per game (a goal per game away from home). They have conceded thirty-five goals at a rate of 2.2 goals per game (2.6 per game away from home). Vauxhall have not kept a clean sheet since the 1-0 win over Corby at the start of the season, but have only failed to score four times, twice at home and twice on the road.

Thanks to the generosity of Leeds United, Celtic will have the services of Alex Cairnes for another month, meaning Celtic's last game was not Alex's last game, although it was a welcome return to winning ways with a 1-0 win over Harrogate Town at Bower Fold. In that game, Celtic lined up as:
1. Alex Cairnes
2. Mark Lees
3. Jonny Lindsay
4. Kristian Platt
5. Joel Bembo-Leta
6. Prince Haywood
7. Adam Pepper
8. Lewis Hatch
9. Jack Laird
10. Corey Gregory
11. Mitchell Austin